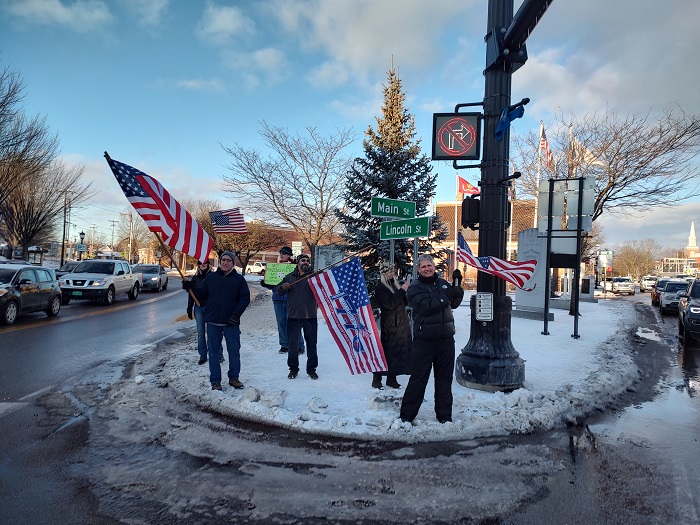 STANDING FOR FREEDOM: On Friday, about 25 Vermonters took to the five corner intersection of Essex Junction to let motorists know they support the Freedom Convoy in Ottawa, Canada.

Around 25 Vermonters braved freezing cold temperatures Friday night at the five-corners intersection in Essex Junction to hold signs and flags in support of the Canadian “Freedom Convoy.” A similar demonstration took place on Saturday in South Burlington.

As Friday’s protest was under way, about 150 miles northwest in Ottawa, the convoy itself endured a police crackdown that is receiving international scrutiny.

Jennifer Nissi, of Washington, said that she’s in solidarity with the truckers.

“[We’re here] to support our brothers and sisters who are fighting for our freedoms in Canada, and we’re here to support freedom for us,” she said.

She said it’s exciting to hear that more convoys are starting.

“We’re all ready to support them on Wednesday when they are supposed to leave, and we are grateful for what those truckers are doing,” she said. “They are putting their lives, their families, on the line for us, for you and I standing here. For our clothes, our food — everything that we get is from a trucker, and they are the ones holding the line for us.”

The U.S. is expected to have its own trucker convoy by the end of this week.

It’s Official! We start our Convoy on February 25th! We have finished the dates, times, routes, pit stops and have everything ready for the March 1st arrival on the National Mall, DC. I’ll be posting the detailed routes tomorrow! #freedomConvoyUSA2022 pic.twitter.com/qspYRXL23a

Seth Manley was passing through the intersection when he saw the demonstration and decided to stop and join. He offered an update on the latest happenings with the Canadian truckers, who were confronted by a massive police response that same evening.

“Last I knew they were standing tight, and I guess they arrested a couple of the leaders,” Manley said. “I heard they cleared out the blockades.”

Despite these developments, Manley noted that the goal of the protests — to pressure provinces to drop their COVID mandates — is working to some extent.

“Some of the provinces did drop their mandates, or they are in the process of dropping them, so it definitely put some pressure on them,” he said. 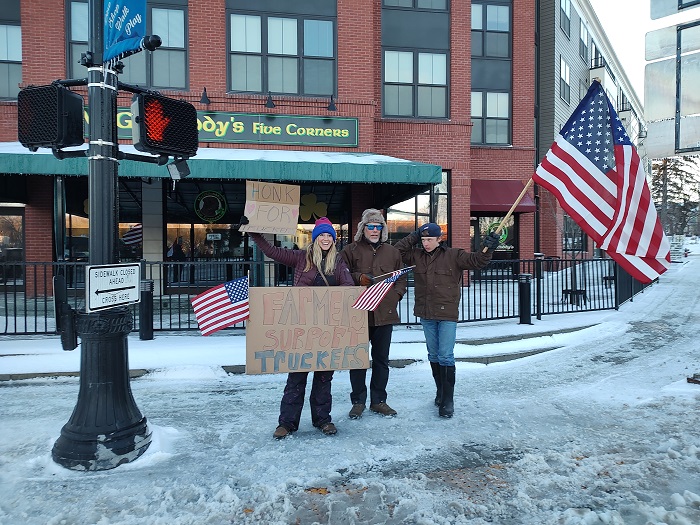 Over the weekend, police in Ottawa were moving in and forcibly detaining truckers. According to a Daily Mail (UK) report, “Hundreds of cops backed by armored vehicles and horses arrest[ed] at least 100 Freedom Convoy protesters in Ottawa and tow[ed] 21 big rigs using Emergencies Act powers.”

Tom Licata, of Burlington, recalled the warnings of a past president regarding the status of Americans’ freedoms.

“I’m here because we know Ronald Reagan once said that ‘freedom is only one generation from being extinct,’ and too many of us are becoming a nation of sheep. We need more shepherds to lead us, and I’m here to fight for freedom,” Licata said.

Jim Hill, of Montpelier, noted that the atmosphere of the rally was friendly.

“We’re here to show solidarity with the Canadian truckers,” he said. “We are here for freedom and liberty, just to get some support. You can hear all the horns honking all around us. I will just also let people know, if you are interested and care about our freedoms and liberties and about truth, then you are not alone.

“So yeah, I traveled from kind of far away to come to be up here, and it’s just nice to people who are happy and love each other and this country.”

Leah Olave, of Essex, said that she came to the rally to support people’s choices regarding their health care.

“We believe in freedom of health choice, whether that is being fully vaccinated, choosing some vaccinations, not choosing others, being masked or not being masked,” she said.