One of Vermont’s most ardent green energy lawmakers has again called for a wealth tax to help pay for the implementation of renewable technologies.

In a meeting of the Senate Energy Committee last Wednesday, state Sen. Anthony Pollina, P/D-Washington, made a pitch for S.44, an act relating to a Vermont Green New Deal.

“I believe that when it comes to climate change, we are in an emergency situation and need to raise revenues in order to make investments in climate change actions that will help us alleviate the problem as soon as possible,” Pollina told the committee.

“I think we’ve been pretty good at setting goals in the past and in the present, but we really need to raise revenue in order to ensure that we can reach those goals,” he said. 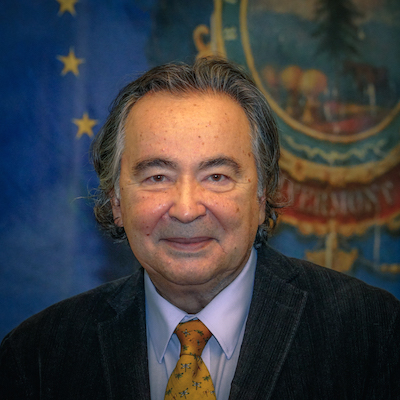 FOR THE WEALTH TAX: Sen. Anthony Pollina, P/D-Washington, told the Senate Energy Committee he thinks a wealth tax on the wealthiest 5% of Vermonters will be necessary for spending on green energy projects.

The recently passed Global Warming Solutions Act says Vermont must achieve its official green energy targets, including 90 percent renewable energy use by 2050. In addition to transforming Vermont’s green energy goals into mandates, it allows individual Vermonters to take legal action against the state if these targets aren’t met.

Pollina said S.44 could be an important component for funding the projects that come from of the new 23-member climate council, also a product of the GWSA. He said that his bill would put an income tax surcharge on the wealthiest 5% of Vermonters. This charge is estimated by the Joint Fiscal Office to raise about $30 million per year.

“Those [are the] folks who I think are most able to afford a contribution to climate action,” Pollina said, adding that projects might include weatherization, renewable energy, regenerative agriculture, and electric vehicles.

A surcharge on an income tax has been done before in Vermont about three decades ago, according to Pollina. At that time, the surcharge was simply to have Vermonters contribute more to the economy in general.

The senator hinted that the state will need more money from other sources if green energy targets are to be met.

“I know we are going to be asking other folks to chip in. We’re going to be talking later on this year and the next year and the years to come about the various fees that will be added to taxes and energy sources and whatnot,” Pollina said.

Sen. Chris Bray, D-Addison, the committee chair, noted that lawmakers will seek a combination of funding sources to push green initiatives in the years to come.

“My hope is that we assemble a collection of tools and then we don’t have to lean on any one thing so hard,” he said. “And my hope is that that makes for a more regional package all the way around as opposed to the silver bullet, which could be a very expensive silver bullet.”

Bray has been at the forefront of calls to increase weatherization of Vermont homes. While that often means patching up air leaks to reduce heating costs, it can also mean promoting cold climate heat pumps, another new and subsidized green technology.

Cost estimates on weatherization range wildly, from Gov. Phil Scott’s $25 million proposal to the $3.1 billion plan called for by Bray.

In addition to weatherization and home heating, climate mitigation goals of the climate council will include pushing the electrification of the transportation sector, including continuing to push subsidized electric cars, and more renewables such as solar and wind power.

Sen. Dick McCormack, D-Windsor, expressed some concern about the possibility to pushing wealthy residents out of the state due to high taxes.

“I’m wondering if you have any actual information on what the point of diminishing returns is?” he asked. “How far can we push the income tax before it starts to alienate other people with the money?”

Pollina was not concerned about that potential outcome.

“In general, the fact is that wealthy people don’t leave when you raise taxes,” he said. “There’s no evidence of that taking place.”

A study released in February by the Pioneer Institute suggests otherwise. “The data show a persistent trend of wealth leaving high-tax states for low-tax ones, especially in the Sun Belt,” it states.