Friday, the Vermont Department of Labor released data on the Vermont economy for the time period covering May 2020. According to household data, the seasonally-adjusted statewide unemployment rate for May was 12.7 percent. This reflects a decrease of three and eight-tenths percentage points from the prior month’s revised estimate of 16.5 percent.

“The May figures show increased economic activity as companies continue to re-open. Construction, Manufacturing, Retail, and Leisure & Hospitality industries showed significant increases in employment this past month and early indications see this continuing. It is important to note that April figures were revised significantly this month drawing a more realistic picture of what Vermont actually experienced with nearly 58,000 people out of work and a statewide unemployment rate of 16.5%. While the May numbers show a positive change from the prior month, we are still in the middle of a global pandemic that is significantly impacting Vermont’s economy. That’s why it’s so important for the public and business communities to follow the safety guidelines and required protocols, so we can continue getting businesses open and people back to work as quickly as possible.” – Michael Harrington, Labor Commissioner

The preliminary ‘not-seasonally-adjusted’ jobs estimates for May show an increase of 14,800 jobs when compared to the revised April numbers. There was a decrease of 2,700 jobs between the preliminary and the revised April estimates due to the inclusion of more data. The broader economic picture can be seen by focusing on the over-the-year changes in this data series. As detailed in the preliminary ‘not-seasonally-adjusted’ May data, Total Private industries have decreased by 50,100 jobs (-19.6 percent) and Government (including public education) employment has decreased by 5,400 jobs (-9.3 percent) in the past year.

The seasonally-adjusted data for May reports an increase of 15,700 jobs from the revised April data. As with the ‘not-seasonally-adjusted’ data, this over-the-month change is from the revised April numbers which experienced a decrease of 2,900 jobs from the preliminary estimates. The seasonally-adjusted over-the-month changes in May varied at the sector level. Those with a notable increase include: Construction (+3,700 jobs or +48.7%), Durable Goods Manufacturing (+3,800 jobs or +31.9%) and Accommodation & Food Services (+2,400 jobs or +20.0%). Sectors with a notable decrease include: Local Government (-600 jobs or -2.2%), State Government (-400 jobs or -2.1%) and Other Services (-100 jobs or -1.2%). 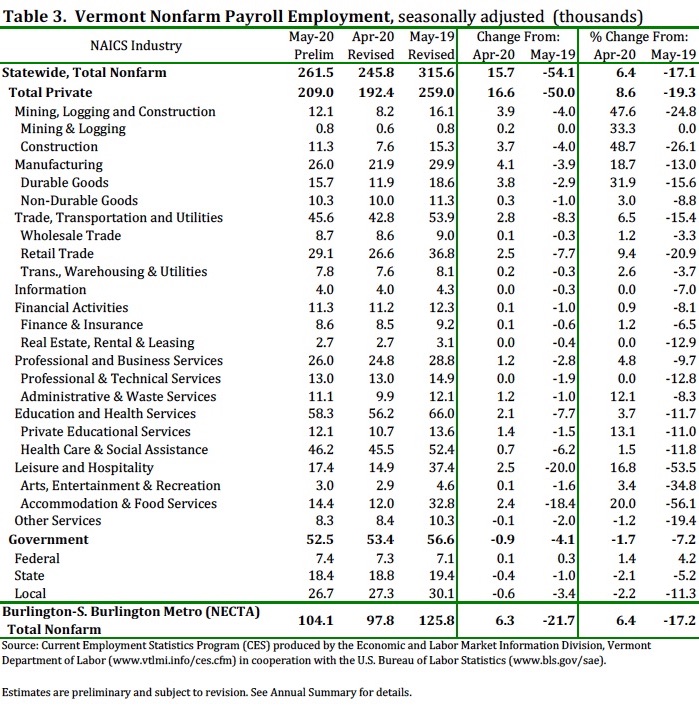 One thought on “Vermont’s unemployment rate decreases to 12.7 percent in May”