Editor’s note: This is Part 3 of our Vermont Voices Series.

A bill legalizing limited marijuana possession was passed by the Vermont Senate this week, after clearing the House the first week of the legislative session. The controversial bill, H.511, is expected to be signed into law by Gov. Phil Scott, according to spokesperson Rebecca Kelley. 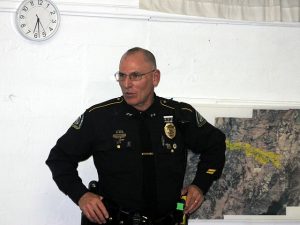 The Vermont law enforcement community has loudly opposed the legalization of recreational pot, and in recent weeks police leaders and drug experts have appeared at the Statehouse to caution legislators about the fallout of H.511 if it becomes law.

Among the outspoken police officials in the state is Vergennes Police Chief George Merkel, president of the Vermont Police Association. The association, along with the Vermont Association of Chiefs of Police and the Vermont Sheriffs’ Association, have cautioned state lawmakers to go slowly on the issue.

While Scott formed the Governor’s Advisory Committee on Marijuana in 2017 to help Vermont proceed with caution, top law enforcement officials say they are are feeling betrayed by the governor and lawmakers.

True North: What has been the reaction of police officials over what appears to be that recreational pot possession and use will be approved?

Merkel: None of us are happy with the state entertaining the legalization of marijuana. There are a number of concerns we have about legalization. Certainly the one that jumps out most is the highway safety consideration, especially in light of an uptick, unfortunately, in highway fatalities. A good proportion of these incidents involved drugs (including marijuana).

To assume that people are going to use marijuana responsibility is like assuming people are going to use alcohol responsibly. We’ve seen what happens and we’re seeing it all now, even before legalization. We see people driving (under the influence) with children in the car, and we see people using marijuana elsewhere, which is now pretty prevalent.

True North: Regarding your comment about highway safety, the highly publicized 2017 news report about multiple fatalities in Bridport, Vt., of carnival workers on their way to the Addison County Fair & Field Days, has been linked to a high level of the psychotropic drug tetrahydrocannabinol (THC), the active ingredient in marijuana.

Merkel: Yes, when the Vermont State Police completed its toxicology report, there was a presence of marijuana. … When the same thing keeps cropping up, with the presence of any amount of drugs, it is not good. In a tragic situation like that (in Bridport), and when you see a large number of fatalities involved with drugs including marijuana, it’s bad — a real problem and concern. If you smoke marijuana, and then operate a motor vehicle, you’re a danger (to other motorists); there’s no two ways about it.

True North: As president of the Vermont Police Association, do you feel like Gov. Scott and legislators have been listening to the committee members and the rest of law enforcement community on this issue?

Merkel: Vermont legislators have not listened to us. It’s not just what law enforcement has presented in the argument. Experts on mental health, education and other citizens have testified with their concerns about the legalization of marijuana. They’ve heard all the terrible stories, independent reports, developmental risks and other warnings. They’ve all been paraded in front of the legislature. But it’s a matter of what they want to hear. … I don’t know why we even testified. They didn’t even listen to us. When we see something as dangerous as this, which presents a risk, we have an obligation to tell the people what they need to hear, not what they want to hear. It’s obvious they did not want to hear what we had to say. … Once you open Pandora’s box, you can’t shut it.

Merkel: Well, two mature plants will yield (approximately) 8 ounces each per plant, plus the one ounce for personal use. How does this all make sense? What do you do with all this marijuana? The pro-marijuana people started, first, with a very narrow scope — the medical use of marijuana. Law enforcement doesn’t have a problem with limited use for people with long-term pain, et cetera, but then by allowing medical marijuana, which sounds benign, you’ve created a level of acceptance. First comes medical marijuana, then decriminalization, and now legalization for recreational use. … We saw the steps that were coming. This is the game plan of the pro-marijuana people. The next step will be to tax and regulate.

True North: What are law enforcement concerns about marijuana and young people? Do you consider it a “gateway drug” or is that now a passé term?

Merkel: I don’t know of a single heroin user who started out with heroin and I’ve talked with a lot of addicts. … Here in Addison County a large number of kids start out with cigarettes, marijuana, alcohol, then progress to pills, coke, or crack, and then go on to heroin. Of the 20 or so kids I knew who are no longer here, and who have gone down this path, they started out with marijuana and moved on.

True North: Pro-marijuana people argue that police have spent too much time enforcing marijuana laws and that’s a good reason for legalizing it. Also, that a lot of Vermonters are in jail over possessing trivial amounts of marijuana.

Merkel: Well, that’s a lie — it’s just not true. We’re not spending a lot of time enforcing marijuana laws now. If we happen to run across it, we do something about it. … And the allegation that all these people are in jail on marijuana offenses is also not true. If someone is in jail in Vermont (over this) it’s because they had a large amount or the marijuana (or) was tied-in with some other offense. If we run into someone trafficking heroin, they’re smoking marijuana without doing their own product. Marijuana is always on the periphery of the harder drug scene. That poses a big problem and we’re facing a huge problem with opiates and it’s not getting better. You have drug addiction, trafficking, and then the crime that goes along with it. So, we’re fighting the opium problem and now we’re legalizing marijuana? It makes no sense. Take away the marijuana laws and it prevents us from our ability to interdict those cars (transporting other drugs like heroin). Also, police canines have been trained on the odor of marijuana and now you we have to desensitize the dog? How do you think that’s going to end up in court?

True North: In a sense, you’re implying that when it comes to marijuana, the cautionary voice of law enforcement has been essentially betrayed by Vermont’s elected officials?

Merkel: The thing that bothers us the most is that we have been discounted during this whole debate about legalizing marijuana. Gov. Scott’s commission was established to provide guidance and answers, but now it seems to have been a waste of time — all this time and effort spent, a waste. What’s the sense of having the commission since its report was supposed to be released, I believe, by Jan. 15? Now the House and Senate have already ok’d the legalization bill (before reviewing the report). It’s really all about money to be made. That’s what’s really driving the marijuana-legalization train.

Images courtesy of city of Montpelier and Vergennes Police Department