At a news conference Wednesday at the Statehouse, Gov. Phil Scott stood alongside leaders of Building Bright Futures to discuss childcare in the Green Mountain State. This week the childcare advocacy group released its 2017 report, “How are Vermont’s Young Children and Families?” 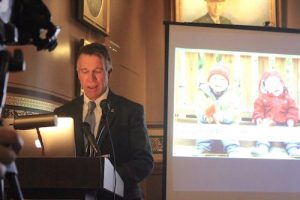 The report’s areas of focus include family and social relationships, safety, health and development, early care and learning, and family economic well-being.

“This report has been an important resource for lawmakers every year to track progress and make recommendations seeking for all children to have a strong start in life,” Scott said from behind the podium in the Cedar Creek room.

“It’s recognizing the need to expand access to affordable childcare and pre-K,” he said. “The economic challenges put on new parents are more significant today than 50 years ago, I think that’s something we all realize.

“Ensuring the availability of affordable childcare will make Vermont a draw to young professionals looking to start a family.”

Representing Building Bright Futures was the group’s executive director, Sarah Squirrell. She and other childcare experts discussed the impacts of trauma, poverty, neglect, relationships and other factors on a child’s development.

In particular, she emphasized the growth in adverse childhood experiences, or “ACEs,” which are traumatic events, such as divorce or substance abuse. She explained how young children in today’s society are increasingly tallying up these events before they even get into grade school. 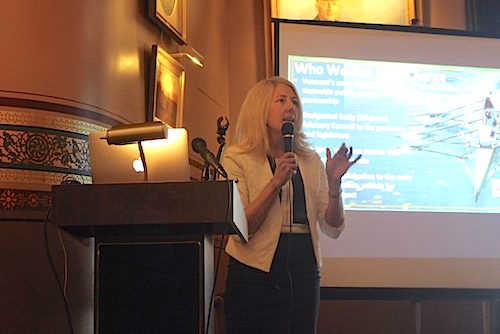 According to the report, one in eight Vermont children have experienced three or more ACEs.

“We know the current brain and social sciences shed light on the impact of childhood adversity,” Squirrell said. “Toxic stress impacts child development, and we know many of our Vermont children are struggling.”

There were more concerning stats in the report, including the rate in which children are in protective custody. From 2012 to 2015, that number has increased from 8.1 per 1,000 to 14.9 for children under age 3.

One of the group’s recommended policies is to continue support for pre-K education programs. Currently, the state offers to pay for 10 hours of free prekindergarten instruction a week to qualifying Vermont families.

But state-sponsored pre-K programs are controversial. Critics see them as interfering with critical early development years of parental nurture and bonding. Moreover, high profile university and government studies have found them to be of no benefit.

A 2015 Vanderbilt University study of Tennessee’s pre-K program found that students lose their advantage from the extra education by the second grade. In some cases, the children performed beneath their non-prekindergarten program peers by the third grade.

Asked if such research undercuts the push for taxpayer funded preschool, Squirrell said she thought Vermont’s approach might get better results.

“I think what Vermont has done in terms of universal access to pre-K, and what makes it such an incredible public health investment, is its universal aspect. We know that children in preschool in socioeconomically diverse classrooms have better learning gains,” she said.

“We saw from some of the data here that there’s a little bit of a gap in terms of kindergarten readiness, so we want to make sure that children walking through those doors on their first day of kindergarten are well prepared. And universal pre-K has been proven to be an effective measure to support early care and learning (as well as) social and emotional development.”

Lisa Guerrero, an advocate of early childhood workforce development and capacity building programs, and a representative of the group Positive Spin, told True North after the event that a study by University of Chicago economic professor James Heckman found measurable benefit of prekindergarten programs on grade school and beyond.

Squirrel had advice for families with young children in which both parents have to work.

“Try to understand what your eligibility is, work with your provider, and do the best you can,” she said.

“Parents are having to make those tough choices every single day: ‘Do I go to work, or do I stay home and take care of my children?’ … Which is why ongoing and more investment in the childcare financial assistance program will help that parent who is struggling with exactly that issue.”

Sen. Becca Balint, D-Windham, on hand to advocate for state preschool, said children are constantly looking to adults as examples, as she learned from her past experience as a teacher. A parent said her child had changed her eating habits after observing Balint’s food choices at lunch.