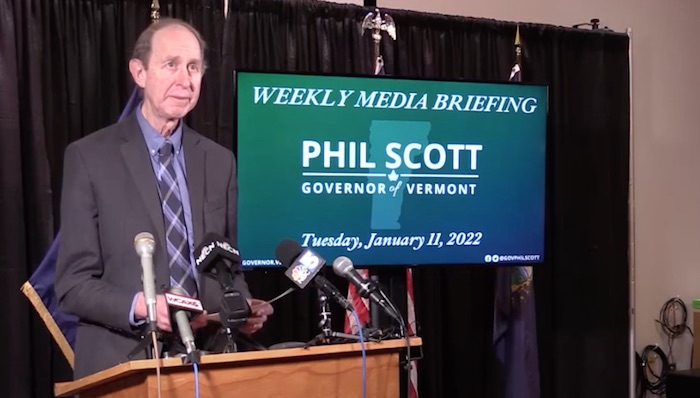 HOSPITALIZATIONS GLITCH?: Vermont’s top health official says the Department of Health is looking into a potential problem in how COVID hospitalizations are counted in Vermont.

Vermont Health Commissioner Mark Levine said Tuesday that the Health Department is aware that nearly half of New York’s COVID-19 hospitalizations have been hospital admissions from medical emergencies unrelated to the coronavirus, and that Vermont may have a similar glitch with its hospitalization statistics.

New York Gov. Kathy Hochul released data late last week that about 43% of COVID hospital admissions in the state did not list COVID as one of the reasons for admission. These patients were tested for coronavirus and found to be positive after being admitted for other reasons.

“I would not want to give a percentage today based on my guess about that, but the bottom line is we’re actually looking into [this] — which is trying to get a better handle on understanding who is admitted because of COVID, and who is admitted and then you find out they have COVID because they got a test in the emergency room on the way up to the floor,” he said.

Levine added that when it comes to hospitalizations and COVID, there’s often a combination of factors involved.

“Keep in mind it’s not always black and white,” he said. “There are many people who are very complex medically; those are the kind of people that end up in the hospital generally anyways, and COVID could be the straw that breaks the camel’s back, even though it wasn’t mainly their reason for admission.”

On Monday, Vermont set a new COVID hospitalizations record at 101. If New York’s percentage — 43% — holds true for Vermont, only about 56 of those hospitalizations would be admissions in which COVID is listed as the reason for appearing at the hospital. The rest would be individuals hospitalized for other medical emergencies, and who later were tested for COVID and found positive.

The Vaccine Adverse Event Reporting System (VAERS) is the federal government’s early warning system to detect possible safety problems with vaccines. The database is managed through a partnership of the Centers for Disease Control and Prevention (CDC) and the U.S. Food and Drug Administration (FDA).

According to the most recent VAERS data for Vermont, since the beginning of the pandemic 1,878 residents have reported adverse reactions after receiving a COVID vaccine. Of that number, 11 people died, 30 became disabled and 69 were hospitalized.

Levine told True North on Tuesday that while these cases are reported locally, investigations are up to the CDC and FDA.

He added: “The Vermont Department of Health nor the Vermont clinical community does not investigate every one of those, they report those. And they go to the CDC and federal authorities where further investigation is undertaken and looked at in the context of what’s being reported by all 50 states and territories as a big compendium.”

In a separate interview with True North, state Rep. Anne Donahue, R-Northfield, vice-chair of the House Health Care Committee, said committee members heard about VAERS cases data when they addressed childhood vaccination requirements for schools. She said the problem with the data is the lack of further investigation by the appropriate health care authorities.

“One of the other issues around it is it’s based just on reports without any investigation or followup or knowledge of those reports,” Donahue said. “Also they can be made by anyone, so it might be a physician who has a lot of expertise, it might just be somebody who believes they had an issue.

A 2010 Harvard University study on VAERS data quality determined that “fewer than 1% of vaccine adverse events are reported to the system.”

Last year a Vermont nurse approached national media about allegations that her superiors were pressuring staff not to investigate potential COVID vaccine reactions.