Just recently the state’s financial statements were published for the fiscal year ending June 30, 2018. For perhaps the first time in history, the state’s balance sheet shows a negative net worth of $200 million. In other words, our liabilities exceed our assets. By contrast, the fiscal year ending June 30, 2017, showed our net worth was a positive $1.3 billion. So the logical question would be, what happened to give us a variance to the tune of $1.5 billion? 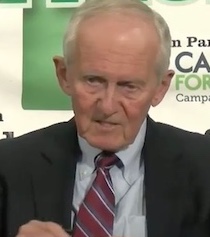 David Coates is a retired managing partner for KPMG.

The answer is really quite simple. The GASB (Government Accounting Standards Board) finally required that all unfunded liabilities (pensions and other post-retirement benefits) must be recorded on governmental financial statements. Pensions were required in prior years, but the big hit this year for Vermont was the OPEB, or commonly referred to as the retiree health care benefits for teachers and state workers. These newly recorded retiree health care benefits, which now total $2.2 billion, created the negative net worth as noted above. I have previously reported this was coming, so it shouldn’t be a complete shock for those who have been paying attention. Vermont is certainly not alone with a negative net worth. Several other states find themselves in a similar situation. But, Vermonters have always lived within their means, including balanced budgets, and somehow a negative net worth seems like a big step backwards.

Because the State is using a rate of return assumption of 7.5% on pension investments, which is not realistic given past results and current market conditions, I believe that our negative net worth of $200 million is really much larger. For 2018, S&P recorded a 6.2% decline and the Dow a decline of 5.6%. Over the last five years the actual rate of return for the pension investments was 6.3% and over ten years, 5.5%; nothing close to the assumed 7.5%. Per the Actuary, if the rate was 6.5%, it would add over $600 million to the State’s pension liability. When that happens, it will add an additional $30 million plus in required annual payments to the $205 million now due in 2020, as you will see noted below.

Another disappointment in 2018 was the forewarned loss of the State’s Triple A bond rating. One of the factors stated by Moody’s that could lead to such a downgrade was “substantial growth in debt or unfunded post-employment liabilities.” This loss means the State will pay more interest on new bonds issued, as will other organizations that rely on the State’s bond rating.

The negative net worth and the downgrade in our ratings could both have been avoided if we had taken corrective action several years ago to make structural changes to the State’s benefit plans. The Pension Commission (of which, I was one of nine members) in its 2009 report made several recommendations to improve the pensions. A key recommendation that was passed by the Commission would have required the plan participants to share in any annual costs that exceeded 3.5% (the then Legislative Joint Fiscal Committee provided the 3.5% as the annual benchmark for retirement and health care benefit increases). When the union contracts were negotiated, this recommendation was not included.

According to the PEW Foundation, there are 29 states that have some form of cost sharing or other mechanism with plan participants, but we aren’t one of them, and the State would be in much better shape if it had cost sharing.

The unfunded liability for pensions increased by $73 million this past year and now totals $2.3 billion. The State continues to fund pensions in accordance with actuarial recommendations, which increased from $66 million in 2008 to $205 million in 2020 and continues to place great stress on our revenues and other important programs.

However, the State is NOT funding the actuarial recommendations for the retiree healthcare plans, leaving a substantial shortfall every year. In 2020, this will be around $85 million and will continue to grow unless something is done. Obviously, it is not being paid because the State does not have the resources available without raising taxes.

Finally, since 2009 the State’s population has essentially remained the same, the total workforce has decreased by around 15,000, however, the number of retired and active participants in the pension plans has increased by 17%. One must ask why we are providing benefits that we cannot afford and are not paying. Instead, we just keep running up the tab for the next generation and the one after that.

David Coates is a retired managing partner for KPMG and current member of the Vermont Business Roundtable. Reprinted with permission from the Ethan Allen Institute Blog.

10 thoughts on “David Coates: Vermont has a negative net worth”