On Town Meeting Day, residents in select towns across the state will be voting on climate resolutions promoted by the climate-activist organization 350 Vermont.

The group got 39 towns to vote favorably on such resolutions last year, and this year it expects to persuade 25 more.

The resolution “aims to find local solutions to reduce emissions, improve efficiency, and transition away from fossil fuels,” a press release from the group states. “In a year that saw the IPCC release a report calling for radical reductions in CO2 emissions by 2030, Vermont emissions are still rising. 350VT sees the resolutions as important next steps towards a Green New Deal for Vermont.” 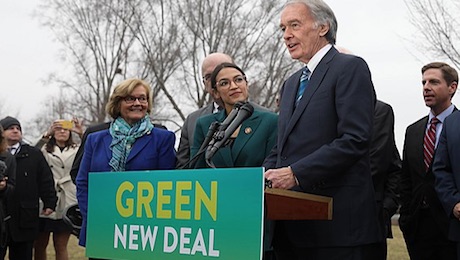 350VT solutions organizer Jaiel Pulskamp and other volunteers will be present at Town Meeting Day locations to track voting trends.

Roger White, a member of 350VT’s Writing for Climate Justice group, wrote that there are three bills at the Vermont Statehouse that the organization also wants to promote.

The resolutions will remind Vermonters of the state’s Comprehensive Energy Plan for reducing greenhouse emissions. Pulskamp is optimistic about Rutland County, where 350VT has been especially active.

Matt Cota, executive director of the Vermont Fuel Dealers Association, told the House Energy and Technology Committee he has concerns with restricting new carbon-based fuel infrastructure, and he said fossil fuels continue to play a central role in energy in Vermont — especially for home heating during bitter cold temperatures.

At the federal level, the Green New Deal, a non-binding resolution crafted by Rep. Alexandria Ocasio-Cortez, D-N.Y., and Sen. Ed Markey, D-Mass., looks to overhaul energy and guarantee income and services for all Americans, including those “unwilling to work.”

Rough cost estimates for the societal overhaul are in the trillions. At least 40 U.S. House Democrats have stated their support for the proposal, including Rep. Peter Welch, D-Vt..

Republicans have called for a vote on the resolution in an apparent effort to get all its supporters on the record. So far, U.S. House Speaker Nancy Pelosi has balked at the notion of a vote.

Elsewhere in the world, where the green energy push is well underway, the results have been largely negative for the economy. One example is Germany, which gets 35 percent of its energy from renewables.

“The change isn’t cheap,” a 2017 Fortune.com report states. “Germans will have to pay the energy hikes during this transition which since 2007 have risen by 50 percent [not including state subsidies]. There’s also the multi-billion Euro expansion of the electricity grid which moves wind energy from the north to the southern states.

“The government will also have to compensate their energy companies to shut down their coal and nuclear plants early, and then there’s the lack of affordable storage. Batteries are still too expensive to be economic.”

“Resource-rich California can do so much better than what the supermajority Democrats in the state Legislature have done to working-class families in this state,” the Orange County Register reported in 2017. “There is simply no excuse for Sacramento’s endless stream of policies that increase the cost of energy when we have all of the innovation, natural resources and opportunities to make energy more affordable.”