The Transportation and Climate Initiative (TCI) will be the “banner bill” for the Vermont Legislature Climate Solutions Caucus in 2020, Sen. Chris Pearson, D/P–Chittenden, told about 50 climate-minded lawmakers and advocates at an informal State House meeting Wednesday morning.

The Transportation & Climate Initiative (TCI) is a 13-state initiative formed to reduce transportation emissions by charging a “pollution fee” to fuel dealers, who would then pass along costs to consumers at the pump. Early estimated costs are 5-18 cents per gallon of gasoline and diesel fuel.

“TCI is the banner bill, absolutely,” Pearson said at the informal meeting held in the Vermont State House cafeteria before the daylong scheduled legislative briefing.

Later in the day, comments by Vermont Agency of Natural Resources Secretary Julie Moore suggested the administration of Gov. Phil Scott could back the TCI, if some concerns are met. At an 11 a.m. all-legislators briefing, Sen. Chris Bray, D-Addison, asked Moore to explain the administration’s position on the TCI given Gov. Phil Scott’s public non-support for a carbon tax. Moore answered, “Where those investments get made is the key to that conversation. A carbon tax is generating revenue without saying where those revenues will go. The administration has a strong desire to see [investments in economic development and affordability].”

Sen. Bray pressed: “If we don’t have those funds coming in, we’re going to be hamstrung” in making those investments. Moore repeated that investment in economic development and affordability “is going to be a key part of this solution going forward.”

But Moore cautioned, “The rural character of Vermont is a challenge in thinking how this program will work.”

GOP gubernatorial candidate John Klar attended the briefing and heard Moore’s comments. “I was surprised to hear such a statement,” he told Vermont Daily Chronicle afterwards. “She [Moore] suggested that the determination of whether or not TCI met the definition of a carbon tax was dependent on how collected funds were expended. But more, she seemingly implied that Governor Scott was waiting to be informed of the destination of taxes collected to determine whether or not this tax is a tax.”

“I am a former tax attorney,” Klar said. “I suffer no definitial handicaps that obscure my comprehension of what a tax is. The TCI is a carbon tax. (Or maybe the sales tax is not a tax either, so long as the money is spent well.)” 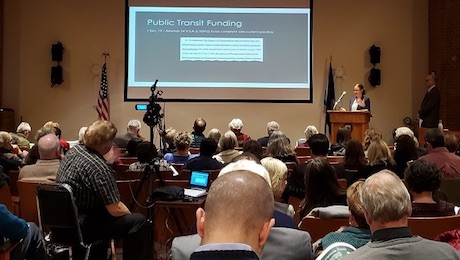 The TCI isn’t the only carbon-reduction idea under discussion. At the informal State House gathering, Pearson said Vermonters have given Climate Solutions Caucus lawmakers a “barrage of ideas,” including:

Some Vermonters say that with more effective building codes, the state can “start having a strategy for pushing those folks further for net zero and solar,” Pearson said.

“Green” mortgages – Big mortgage lenders like Freddie Mac are interested in loaning money at favorable interest rates for homes with rooftop solar, but they want to ensure homeowners follow through with installation, Pearson said.

Sustainable funding for weatherization through energy efficiency management by the State of Vermont.

School officials must be told that “these solutions are not political, they are based on the science,” Copeland-Hanzas said. “If they (parents) are concerned students aren’t learning climate science, help them find a way to.”

In other transportation news, infrastructure improvements needed for the proposed commuter rail between Barre and Montpelier will cost between $67-$96 million, states a Vermont Agency of Transportation study published Dec. 2.

The work would take five years to finish. The feasibility study was requested after renewable power developer David Blittersdorf expressed a wish to establish a commuter line of self-propelled diesel-powered cars on existing tracks between Barre and Montpelier.

6 thoughts on “Daily Chronicle: TCI will be ‘banner bill’ for 2020 climate caucus lawmakers”