The Taylor Street Apartments feature 19 units available to people earning 60% or less than the area’s average median income (AMI). The other 11 units are available for people with 80-120% AMIs. They include six studio (avg. monthly rent $730, heat/water/electricity/trash included), 18 one-bedroom ($850, etc.), and six two-bedroom units ($1,140). About one-third of the units have been leased, developer and landlord Downstreet Housing & Community Development said Tuesday. 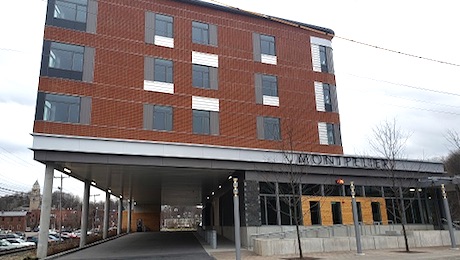 Funding came from private, local, state and federal sources, including $2 million from the $37 million housing bond approved by Gov. Phil Scott in 2017, according to a February 2019 report to the Legislature by Montpelier City Manager Bill Fraser.

The grand opening was held onsite Friday, Oct. 25. About 550 people attended. In her remarks to the crowd, Downstreet Executive Director Eileen Peltier said Montpelier and the rest of the state have seen growing homelessness, the Times-Argus reported. “The Taylor Street apartments and the French Block apartments on Main Street that opened in January are certainly part of the solution,” she said. “This is a big step forward to end homelessness.”

Taylor Apartments is a forerunner of climate-friendly, “sustainable” urban housing designed with alternative transportation in mind. As the Fraser report says, “the project reflects the growing trend in affordable housing towards transit-oriented development, and the bottom floor of the Taylor Street project will include Greyhound and Green Mountain Transit bus stops…Transit oriented projects like Taylor Street can help reduce the overall cost-burden for low income renters.” The newly-extended Montpelier bike path also runs past the building, enroute to downtown Montpelier and points east. The building is heated without fossil fuels. It’s part of the wood-chip burning district thermal heating system that also heats the State House and many state office buildings.

It’s true that many low-income Vermonters can’t afford both housing and cars. It’s also true that fossil-fuel free, transit-friendly urban housing is on the punch-list for climate-conscious lawmakers and land-use planners. It’s central to the Legislature’s ongoing revision of Act 250, Vermont’s land planning and use law. Building  a “demo” just a block from the State House, from which dozens of legislators commute Tuesday-Friday during the session, is a real advocacy bonus – intended or not.

According to an Oct. 31 Times Argus news report by Stephen Mills, these are the funding amounts and sources for both transportation and housing:

The sum of the figures above totals $17.54 million. However, it is uncertain whether this figure represents the actual total cost of the project. Downstreet confirmed Wednesday that the total cost of the housing development was $7.7 million.

This project has been in planning since the 1990’s, a former Montpelier City Councilor told VPR last year. Key federal funding was earmarked in 2003 by Sens. Pat Leahy and James Jeffords.

Not surprisingly for a project with many different funders and stakeholders, there have been delays, including a decision by Redstone, the original housing contractor, to pull out of the project. The site also underwent extensive PCB decontamination.

The project was built with quality of design, materials and workmanship in mind. Downstreet Real Estate Developer Alison Friedkin told VDC Tuesday: “There are a lot of factors that go into building multi-family affordable housing and drive up the construction cost. We build highly energy-efficient, desirable, healthy, and safe housing. There is a cost to each of these factors. Our projects are competitively bid by contractors so we are paying market prices for labor and materials.”