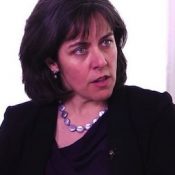 Up for grabs in 2020 is the Democratic/Progressive majority’s ability to confidently override any veto by a Republican governor. At present the House has 43 Republicans, which — with a few ‘blue dog’ Democrats — can often muster enough votes to sustain a governor’s veto.

In her remarks, Speaker Johnson pointed to issues she hopes will dominate the 2020 legislative session, such as passing paid family leave and increasing the minimum wage; measures to address climate change, clean water and women’s reproductive rights also top her list.

And in a nod to the informal setting with attendees milling around the vineyard’s bar sipping wine and noshing on appetizers, Johnson shared some personal observations of her role.

‘As a side note, can I just say how incredibly excited I am to share my title of “Madam Speaker” with Nancy Pelosi?’ she told the crowd, referring to the speaker of the U.S. House and Democratic Congresswoman from California.

Johnson got the biggest laugh of the evening when she shared an anecdote of attending an out-of-state leadership conference where she needed to explain her job. She said she summed it up with: ‘I’m the Nancy Pelosi of Vermont.’

Pro-life activists in Vermont are unsure which “reproductive rights” legislation may be taken up this year. The proposed constitutional amendment to enshrine abortion as a civil right will go to voters in a statewide referendum November, 2020. Legislative action may be needed to continue the estimated $750,000 to Planned Parenthood, to replace federal funding withdrawn this year by the Trump administration.

Like Pelosi, Johnson is a Democrat Speaker in a House of Representatives controlled by Democrats but increasingly influenced by Progressives, Also like Pelosi, she sometimes seeks (not always successfully) to moderate the body’s more Progressive impulses. This year she earned praise from House members of all parties for standing up to Senate leadership and adjourning without their notification or approval. She also was more cautious on ‘tax and regulate’ marijuana legislation than some other House leaders. She is rumored to be interested in statewide office (although probably not in 2020), including possibly Treasurer or Governor. Elected from a two-seat district, GOP insiders believe she will again face a challenge from two Republicans.