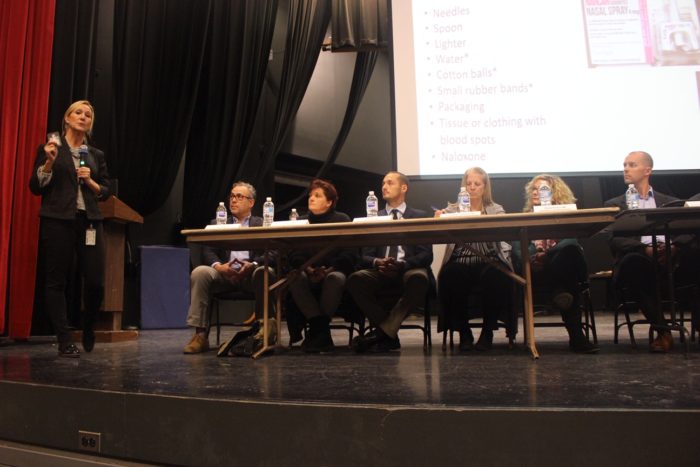 ST. JOHNSBURY — About a dozen law enforcement and drug treatment professionals met Monday evening at St. Johnsbury Middle School to discuss the state of the drug trade, drug addiction and where drugs are coming from that ultimately end up in Vermont.

One message heard by the few dozen people who came out for the event was that the vast majority of hard drugs are coming from outside the country.

A lot of it is crossing an open southern border. McGray shared his experience from the early 1990s when he visited El Paso, Texas.

“I could not believe how wide-open the border was,” he said. “And we had more drug cases than we could handle.”

He worked near the border for nine years, dealing primarily with marijuana, but nowadays there are more hard drugs passing through.

“I could never have imagined that we would have gone from the marijuana situation to what we see now,” he said. “States are legalizing marijuana and we are reporting huge loads of cocaine, heroin, and fentanyl that are again pouring through the southwest border.”

Assistant U.S. Attorney Jon Ophardt added that it’s not all coming from the south.

“We have been seeing a large insurgent of postal delivery from UPS, FedEx, from overseas, including from Europe. So, traditional importation methods across the southern border are still very much prevalent, but that’s not the only way that it’s getting into the country,” he said.

“I prosecuted a case a little while ago which made major news because it was a sled full of Xanax being dragged south across the northern border, so we do still have hard drugs that come south as well, it isn’t simply drugs coming up from Mexico.”

Ophardt said oftentimes the drugs from Canada are coming in from China. He said that’s one of the big routes for fentanyl — an opiate 30-50 times more potent than heroin — is coming into the country.

He spoke about the growing epidemic of methamphetamine as well. He said that the “bottle-shake” method of creating meth within the states is fast-fading as more potent forms of the drug are emerging from Mexico.

U.S. Attorney for Vermont Christina Nolan also spoke to this.

“Methamphetamine is one of the scariest drugs there is,” she said. “It is extremely pure these days because it’s coming from Mexico — it’s no longer manufactured in these amateur-labs locally; it is coming from the cartels and it’s incredibly pure. And people on meth are violent, delusional — they stay up for nights and nights on end and they abandon their families.”

Nolan added that while opioids grab most of the headlines, stimulants are quietly slipping under the radar.

“We do have an opioid crisis, and opioids are responsible for the larger share of deaths in Vermont and across the country, but please be aware of the stimulants,” she said. “Crack cocaine, powdered cocaine, methamphetamine — really every kind of drug that can send a person down the wrong path — those are making a comeback in Vermont.”

St. Johnsbury Chief of Police Timothy Page discussed how the fight against drug abuse is going locally in St. Johnsbury.  He said he understands that the process leading to making an arrest can be taxing.

Page said there’s a system that must be followed.

“It takes time, and I have to ask for your patience in that regard,” he said.

A discussion also was held on the treatment and recovery portion of the drug crisis. One of the panelists to take this on was Cynthia Boyd, executive director of the Kingdom Recovery Center. One point she emphasized was that the addict needs to want to take the initiative.

“If people don’t want to get well then they are not going to get well,” she said. “And you can’t force somebody into treatment; we can’t force them into recovery. It’s going to be when they are ready, and pretty much on their terms — as much as we know how badly they need it.”