President Donald Trump gets a lot of flak for harping on the press. At every rally he loves to point at the reporters huddled behind their laptops and accuses them of spreading “fake news.” The huge crowd cheers Trump and hisses the press. He’s been known to call the mainstream press “the enemy of the people” — reminiscent to some of Stalin. Harsh words! 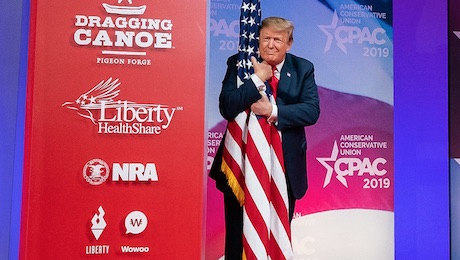 But talking trash about the press is usually as bad as it gets. And to his credit, he also talks a lot to the press. His long, impromptu Q&A sessions at the White House rope lines are now a regular thing. He tweets without ceasing. Reporters covering presidents crave information, honest reaction, and access. In that respect, he’s gold.

More important, Donald Trump does not abuse his vast presidential power by spying on the press, insisting they reveal their sources, and threaten them with imprisonment if they don’t. The same cannot be said about the administration of President Barack Obama. According to Mark Levin’s new book, “Unfreedom of the Press,” Obama administration law enforcement officials:

Levin then states the obvious: Trump, despite harsh, mocking words for the working press that covers him, has not misused his powers. No 1917 Espionage Act accusations of press sedition. No indictments or threats of jail. No proposals of government monitors in the newsroom. He tossed CNN’s Jim Acosta out of his press briefings for extreme rudeness, but then relented a few days later.

When it comes to the press, Trump’s bark is worse than his bite. Obama, on the other hand, rarely barked. He just bit. Often. Yet the “free and independent” press didn’t protest vigorously. It makes you wonder why.

2 thoughts on “Daily Chronicle: Trump calls press ‘enemy of the people,’ Obama treated them that way”