The Green Mountain state has been swirling the blue bowl for years. Far-left “cities,” if you can call them that (this is Vermont), run very hard left for every new progressive fad and take the state with them.

The result is near-permanent Democrat control and Republican governors who act like Dems, while New Hampshire reaps increased rewards. 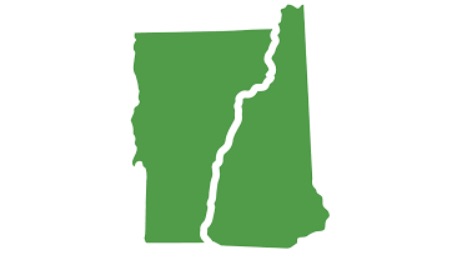 If the math works, why pay the tax in Vermont when you can hop the border and save some cash? New Hampshire businesses will build then near the border to make it as easy as possible.

For years, we’ve enjoyed that relationship as Vermont joins Massachusetts, and increasingly Maine, as another left wing tax-and-spend hell hole.

Their residents cross our border to buy everything from gasoline to vaping supplies and tobacco to just about everything else. We have an interest and dividends tax on investments but no income tax. And there is no sales tax, except at restaurants and hotels (more of a tourist tax), and we just lowered those.

We also have legalized online gambling, which attracts thousands of folks and results in millions more in tax dollars that make lowering other taxes possible like business and sales taxes. And yes, in the wrong hands, Democrat hands, that would not be the case, and we have proof.

Next door, in Vermont, they have a sales and income tax, and talk about another Faustian bargain — Maybe lower the sales tax but add a services tax:

The idea of expanding Vermont’s sales and use tax to cover services has been kicking around for a long time. Last year the Vermont Tax Commission recommended doing so in its report to the Legislature, and 10 years before that the Blue Ribbon Tax Structure Commission did the same. The idea is to “broaden the base and lower the rate.” It sounds simple, but taxing services is generally looked at as a “third-rail” by politicians, and with good reason — nobody wants to pay more for, say, childcare or having their driveway plowed.

On the surface, a services tax might be difficult for New Hampshire to take advantage of the way it does the sales taxes in surrounding states. The NH plow guy would be working in Vermont and charge the tax. But what about services like day care, beauty and barbering, accounting, yoga, gyms, or even auto services, to name a few?

If the math works, why pay the tax in Vermont when you can hop the border and save some cash? New Hampshire businesses will build then near the border to make it as easy as possible.

It’s unconventional, yes, and maybe a stretch, but in the end, New Hampshire still wins.

Vermont’s problem isn’t revenue: It’s Democrats. As long as you have Democrats, the spending is not going down, nor is it going away. It just gets more exotic.

NH Dems have sold sections of highway from one department to another and called that revenue. They’ve proposed new taxes and tax hies on everything you can imagine. And it all starts with lying.

When in power, they lie about the revenue projections, spend all that money, and when we come up short, say, “Oh no, we need to raise taxes.”

Another tactic is to use one-time federal money to pay for things that will need to be funded when that money stops. Oh, no, we need to raise taxes.

No, we don’t. And while we’re still in shock to the feds for too much of our budget, that money is not one time but recurring. And we need our Legislature to start cutting those costs to wean us off the sinking federal ship. States like Vermont increasingly want more from every direction, and that sort of dependency will not end well.

And taxing services will result in less business for some services whether they take it to New Hampshire or not. People can’t afford that in good times, and these are not good times. That means any business tax revenue will suffer.

And regardless of that truth, since you can’t stop spending, you’ll have to raise taxes because Democrats never shrink government even if it kills you.

So that means this: David Flemming at TrueNorth Reports adds, “The temptation to move over the border and pay no state income tax or sales tax should always loom large in legislators’ minds.”

That is a potential downside for the Granite State. Many of those folks flee Vermont only to poison the political well here. And maybe that was the plan all along. They can’t compete unless they ruin what makes them look undesirable, and wherever Democrats take control, less desirable is what you’ll get.