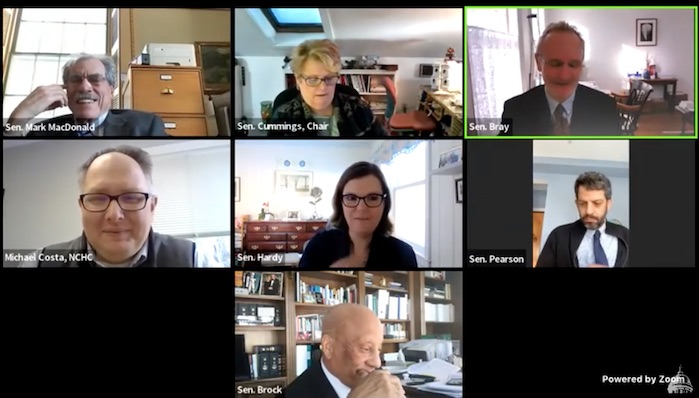 On Tuesday, members of the Senate Committee on Finance discussed expanding Vermont’s sales and use tax to cover services.

Six months ago, the Blue Ribbon Tax Structure Commission recommended expanding Vermont’s “sales tax base to all consumer-level purchases of goods and services except healthcare and casual consumer-to-consumer transactions” while reducing the sales tax rate to 3.6%. Given the chance to consider the proposal, one senator appeared especially eager to consider it.

The idea of expanding Vermont’s sales and use tax to cover services has been kicking around for a long time. Last year the Vermont Tax Commission recommended doing so in its report to the Legislature, and 10 years before that the Blue Ribbon Tax Structure Commission did the same. The idea is to “broaden the base and lower the rate.” It sounds simple, but taxing services is generally looked at as a “third-rail” by politicians, and with good reason — nobody wants to pay more for, say, childcare or having their driveway plowed.

Michael Costa, who a decade ago served as director of the Blue Ribbon Tax Structure Commission, testified to the Senate Finance Committee on Jan. 18, and explained why not a lot of states end up taxing services.

When the Commission was looking at this, they had chatted with policy makers in Florida and Maine that had taken a hard look at this now, many years ago. (Those) fell apart in the same way. In the initial look at it, it allowed for a rather substantial (sales tax) rate drop and as things got more complicated, the rate would rise and then it would create this feedback loop. … Is the system coherent if you’re starting to toss out this service and toss out that service? A lot of states have settled on (a) services (tax) where you kind of tax people who aren’t going to complain about it too much, which is not really a coherent way to approach sales taxes.

Despite the obstacles, some of our senators seemed determined to find a way.

Senator Chris Bray, D-Addison, pondered, “If we included services, we were going to drop the rate more generally. There was enough revenue coming in, that it would lower the rate from 6 (percent) to 3 something. Now I don’t think we have that opportunity. … Was there ever any discussion about adding a tax on services, but not at the full sales tax rate? … So that it would be less jarring, but start to build a larger base?”

The quote above suggests that Bray thinks it would be easier to leave that rate alone for goods and just add a tax to services. Bray did elaborate later on, saying “the rate decrease would be so modest that we would get all the grief associated with expanding the base, and no appreciation for the drop if its only a point for instance (from 6% to 5% on goods). It makes it easier to engage your colleagues.”

So perhaps Bray is of two minds on this — recognizing how unpopular this would be with Vermonters and his Senate colleagues, while also hoping a broadening can happen.

Sen. Mark MacDonald, D-Orange, wondered if lobbyists were responsible for making deals to get their services exempted from the tax expansion. While certainly nobody lobbies to have their service subjected to a tax, it really wasn’t all that hard of a sell for the health care and education industries to persuade politicians that increasing the costs of these services via a tax would not play well with the public.

Costa brought up another good reminder: “Vermont’s in a pretty challenging tax environment …because it’s next to New Hampshire. And New Hampshire has a really different tax system. The specter of New Hampshire makes things a little more complicated.”

“Challenging” is putting it lightly. Vermont’s 6% sales tax compares terribly with New Hampshire’s 0% nonexistent sales tax. And a similar story for the income tax. The temptation to move over the border and pay no state income tax or sales tax should always loom large in legislators’ minds.