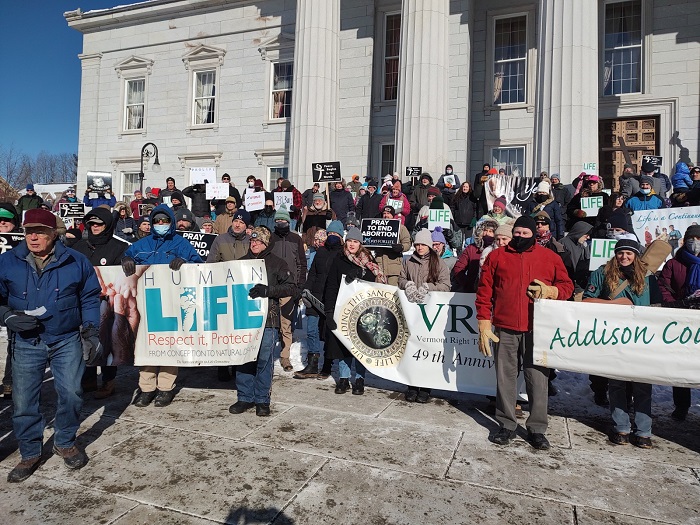 STANDING FOR LIFE: About 250 pro-life supporters showed up in bitter temperatures Saturday to express their opposition to Proposal 5, a proposed constitutional amendment that would allow abortions up until the moment of birth.

MONTPELIER, Vt. — The Vermont Right to Life annual march through Montpelier took place amid frigid temperatures Saturday afternoon, drawing about 250 people who heard speakers warn about Proposal 5, a constitutional amendment that would allow unrestricted abortion up until birth.

Mary Beerworth, executive director for Vermont Right to Life, spoke on what Vermonters can do to stop the bill, PR.5, from advancing.

“I promise you that there’s going to be work to do for every single person in this room,” she said. “We’ve consulted with some strategists because this is bigger than just Vermont. We have national people who are like, ‘Wow, if Vermont goes this road, who’s next?'”

Beerworth said what it will ultimately do is protect the abortion industry.

“It will shield their abortion business of any oversight, of any scrutiny, and of any idea of what they do or how they are doing it. So it’s a dream come true for Planned Parenthood,” she said.

She said that Planned Parenthood is used to having lots of clout at the Vermont Statehouse, including use of taxpayer-funded staff to draft bill language. She added that abortion rights groups were allowed to “use the Office of Attorney General for meetings over the whole summer of 2018.”

Planned Parenthood of Vermont is the leading supporter of Proposal 5. Other backers include Let’s Grow Kids and Voices for Vermont’s Voices for Children.

“Many, many, many of them are using our taxpayer dollars [to support abortion legislation],” Beerworth said.

Maggie Kerrin, the Vermont Right to Life’s director of development and advocacy, spoke about how broad Proposal 5 is in its language. It states that there must be no laws restricting in any way an “individual’s right to personal reproductive autonomy.”

“So we’re really going to start to think about that dome, Proposal 5 — what will really fit under there? What’s that really mean?” she said.

Kerrin, who also is Vermont chair for New Englanders Against Sexual Exploitation, said the language is broad enough that it could be interpreted by courts as protecting prostitution. She said courts will ultimately be left to interpret what “reproductive autonomy” really means.

Another speaker, Annisa Lamberton, of Vermonters for Good Government, said that a lawmaker told her that supporters are using unseemly arguments for passing Proposal 5.

“And this constituent said, Please consider supporting this measure as a means to save taxpayer money that would be spent for healthcare, housing, and living expenses for unwanted children,” she said.

She said her organization will help coordinate opposition to the measure.

“We are going to welcome everyone into this fight if they are working against Prop 5 — that’s what we want to do,” she said. “We want to welcome them in because we can all see the abuses that can come about from this.”

Proposal 5 is expected to come up for a vote in the Statehouse in early February. If approved, it ultimately will go before voters as a ballot initiative during the midterm elections in November.