Vermont’s adult prisons face severe staffing problems. The same cannot be said for juvenile detention — but only because at present, there is no permanent, secure juvenile detention facility in Vermont. The lack of such a facility may have been an indirect, contributing factor in the shooting death of a Burlington man earlier this month.

Here’s Vermont’s inmate situation by the numbers. As of July 21, Vermont’s total prison population was 1,318. This includes the 120 (all male) being held out of state. 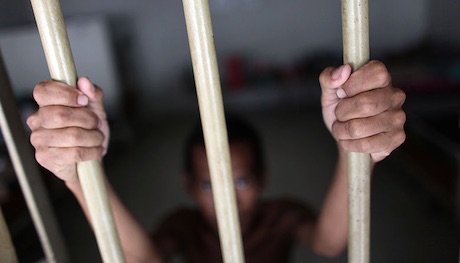 As of July 21, Vermont’s total prison population was 1,318. This includes the 120 (all male) being held out of state.
A total 95 are women, with all but one of them held at the Chittenden Regional Correctional Facility in South Burlington.

A total 95 are women, with all but one of them held at the Chittenden Regional Correctional Facility in South Burlington. Also 42 women are detainees being held pre-trial. The rest already have been sentenced.

This year’s headcount is up slightly over last year, but way down from the year before. On this date last year, the total population was 1295; in 2020, 1407.

The raw data never tell the real story, and these data are no exception. State agencies charged with secure detention face several severe challenges with no sure solution in sight.

It is unclear whether any of these prisoners are juveniles. What is known is that at least four juveniles have been held in adult facilities for lack of any secure, youth-based alternative. The Woodside juvenile treatment facility — opened under public pressure after an horrific slaying committed by two juveniles more than 40 years ago – was closed by the State of Vermont in 2020 due to health, safety and treatment concerns.

Vermont’s lack of permanent, secure facility for youthful offenders is not for lack of trying. Last year, Newbury officials under public pressure shot down a proposed bread & breakfast conversion into a secure youth detention and treatment facility. It’s under appeal. The State of Vermont hopes to acquire a secure facility in Windsor this summer. A State of Vermont report to the Legislature on the status of juvenile detention and treatment is due in December.

Attempts to house juvenile offenders in New Hampshire have run into the Granite State’s problems with its Sununu Center, which is slated to close next year and is suffering similar problems attributed to Woodside.

The State’s failure to replace Woodside may be indirectly responsible for the shooting death of a Hussein Mubarak, 22, in the Old North End of Burlington Thursday, July 14. The man arrested for questioning in connection with his death, 19-year-old Abdiaziz Abdikadir, two years ago escaped not one but two insecure alternatives to Woodside: first in St. Albans, then in Middlesex. Vermont State Employees’ Association President Steve Howard said at the time that not only was the Middlesex temporary facility lacking security, it also was inadequate for providing treatment.

Clearly, in the case of Abdikadir, the State of Vermont failed to provide the services it would have tried to provide at a secure, permanent juvenile treatment facility. It’s impossible to know whether those services, had they been provided, would have made a difference to Abdikadar, and by extension to any victims of crimes he may have committed.

Allegations of drug use, sex abuse by staff, and health and safety violations have plagued the women’s prison in South Burlington. These problems are the basis for Chittenden County State’s Attorney Sarah George’s call for its closure, and moving its residents to a yet-to-be-developed facility, such as housing at the Johnson State College campus (but not if students are there, she said recently).

Pandemic-related mental health challenges of both inmates and staff

A UVM study released in January of this year revealed a discouraged workforce with little faith in leadership. It also shows mental, physical and social price exacted by the staffing shortage and other pandemic-related restrictions on staff and inmates alike.

Since starting work in Corrections, between 39-49% of staff report developing anxiety, depression, obesity, PTSD, and high bloodpressure. 23% – almost one in four – report developing alcoholism or a substance abuse disorder. One in 10 say they’ve seriously considered suicide in the last 12 months.

For inmates, the results are worse. More than half report anxiety, depression and PTSD. One in three say they have seriously considered suicide in the last 12 months.

It is likely that easing of pandemic restrictions – including allowing visitation, which resumed in April — has helped improve some of these outcomes.

However, acute staffing shortages remain. According to a policy announced July 6,  twelve-hour shifts are currently in place on an emergency basis at Northeast Correctional Complex (NECC) in St. Johnsbury and Southern State Correctional Facility (SSCF) in Springfield. The schedule change will take effect at the remaining four facilities on August 28, 2022. Staff will be on a five days on/two days off schedule to start, with the ultimate goal of moving to a biweekly schedule which allows for seven days off during a 14-day pay period, DOC said.

DOC staff, already overworked due to several years of dealing with pandemic restrictions and staffing shortages, are very unhappy with the new 12 hour shifts, Howard said in a recent VSEA statement.

Protecting inmates from suicide and medical health emergencies also has been problematic this year, at least on limited occasions.

David Goldstein, 56, of Barre City, was found in medical distress in his cell at Southern State Correctional Facility (SSCF) in Springfield on the morning of May 17. He died at a local hospital shortly after 4 pm. On April 28, Matthew Castellini, 35, of White River Junction, was found unresponsive by DOC staff at about 6 AM. Correctional and medical staff first responders began life-saving efforts and called for outside medical assistance. Castellini was pronounced deceased at the facility. The suspected cause of death was suicide.

State officials are aware of all of these problems and have publicly stated they are working to solve them. However, funding challenges, regulatory requirements, and the Human Factor so far have proven difficult obstacles.

Inmates released from prison face an unprecedented challenge finding housing, advocates say. The housing market is so tight that landlords can pick and choose, and recently released inmates are often like the clumsy kid on the playground – last chosen, or not chosen at all. On the upside, the hot labor market is somewhat more willing than usual to hire people just released from prison.

For sex offenders, restrictions on internet use make applying for housing and jobs very difficult, as almost all landlords and employers require online applications.