As the August primary election approaches, Ericka Redic is busy campaigning across Vermont in hopes of distinguishing herself from a throng of others competing to fill the U.S. House seat left open by Peter Welch. 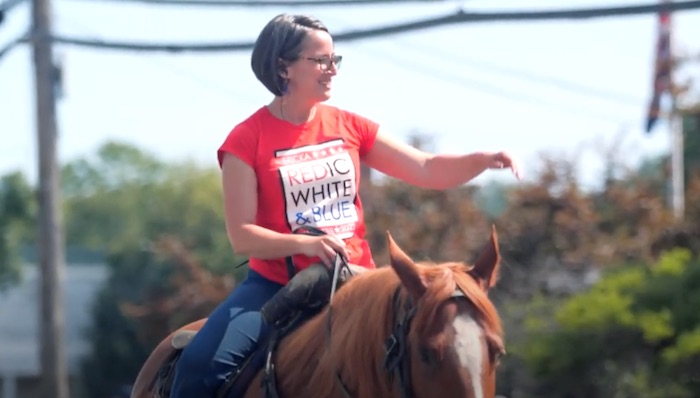 “One of my big platform pieces is public safety,” candidate for U.S. House Ericka Redic said. “And that includes appropriate, reasonable funding and training and whatever law enforcement needs to be successful.”

On Thursday, Redic told True North what she would do if elected the next U.S. representative from the state of Vermont.

Like many others in her party, Redic is making support for law enforcement a campaign priority.

“One of my big platform pieces is public safety,” she said. “And that includes appropriate, reasonable funding and training and whatever law enforcement needs to be successful. We’ve seen, I think, a 14% increase in violent crime just here in Burlington.”

Redic grew up in Milton and her family has a long history in the state. But things used to be safer, she said.

“The house we live in now is the house my mother grew up in — we didn’t lock our doors, we didn’t lock our car doors, you didn’t have to worry about anything. And now we are having shootouts in downtown Burlington and people being shot and murdered in their car in the new North End,” she said. 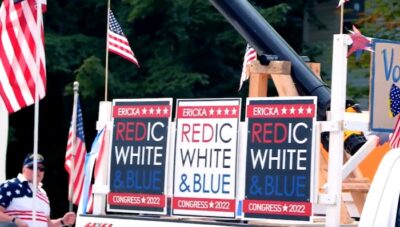 Erica Redic for Congress signs out on the campaign trail

Burlington’s police staff was slashed by about 30 percent back in June of 2021 as a result of the “defund the police” political movement following the death of George Floyd. There’s been a significant rise in violent crimes since then.

Redic said supporting law enforcement will remain an important distinction for her, not only because she believes in it, but also because the Democratic Party is largely viewed as being hard on police and soft on crime.

“My likely opponent on the Democrat ticket, Becca Balint, has repeatedly called for defunding the police, and I can’t imagine what damage she will do if she makes it into office,” Redic said.

Asked about the rising cost of living and doing business in Vermont, she pointed to policies of the current administration in the White House aimed at shifting Americans away from traditional fuels to alternative forms of energy.

“The climbing cost of fuel and the inflation is a feature of the current administration,” she said. “They told us before he got elected –Joe Biden, and his Democrat-led House and Senate — they told us that they wanted to make fuel prices prohibitively expensive to change the behavior of the American people.”

She again noted this is something she could attack her opponents on.

“[Democrat] Becca Balint herself said that ‘we need to tax the hell out of fossil fuels,'” Redic said. “So they are intentionally increasing the cost of fuel oil and home heating oil. This is on purpose, they are trying to force everyone into buying electric vehicles and electric heat pumps and things like that.”

On the topic of education, Redic said parents must be allowed to retain control over health decisions and school decisions. She also offered one idea on how to bring back more parental involvement into schools — by returning to an old practice.

“We need to restore teachers’ aides, as an example. Parents used to be able to go into schools to help out and they are not allowed to do that anymore — we need to fix that.”

She added that parents must be given school choice.

“Parents need to be able to take their school tax dollars and send their kids to the school of their choice,” she said. “So when we see, when only 75% of students graduate and they are not graduating at a high school reading level, it’s hard to tell where that $20,000 per pupil is going to.”