The promise of prolonged Democrat rule is a city in a ditch, on fire, with rampant crime and poop-covered streets. The product of decades of bad policy, broken promises, and corruption. But Democrats like ruling over ruin, and they’d do anything to keep it that way. 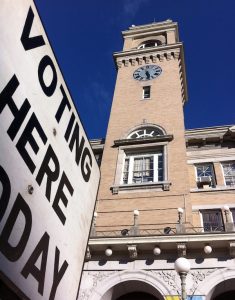 It was only a matter of time until these sanctuary cities tried to give the illegal immigrants they harbor voting rights.

Just a jump to my left, in Vermont, the towns of Montpellier (the state capital) and Woonoski (one of the Northeast’s original granola, Birkenstock Meccas) wanted that (illegals voting), so the Blue Legislature running the Green Mountain State passed a law. Towns can pass ordinances allowing Illegals to vote in local elections.

New York City Democrats wanted that too. They passed a law allowing non-citizens to vote in local elections. New York City elections. You know, because they are there. And why not? There are already 8.8 million people. And in 2018, just under 6 million of them were registered, Democrats.

How many do you need? More.

Register them to vote in local elections (incrementalism) and then seek some social justice voting-rights path to the national rodeo.

The shitty that never shleeps (sorry, bit a lisp there) gave it a go but “Staten Island Supreme Court Justice Ralph Porzio … issued a permanent injunction that bars the city Board of Elections from letting around 800,000 non-citizen residents register to vote.”

It is, apparently, no irony here – illegal.

In a 13-page ruling, Porzio said city officials can’t “obviate” restrictions in the state constitution, which “expressly states that only citizens meeting the age and residency requirements are entitled to register and vote in elections.”

“There is no statutory ability for the City of New York to issue inconsistent laws permitting non-citizens to vote and exceed the authority granted to it by the New York State Constitution,” he wrote.

There they go with the Constitution thing again — it is no wonder Democrats want to be rid of them. Every now and again, some judge looks at the thing and discovers that one of the other two legitimate branches of government has overreached and then rules as if the Constitution has more legal authority than the current crop of pols or their latest fancy.

I’m sure they’ll find some other judge to say something different, and then we’ll be off a higher court. And while that works itself out at significant taxpayer expense, non-citizens in The Shitty that never shleeps will have to vote for Democrats the way they always have — illegally.