Gov. Phil Scott focused his weekly presser on economic development initiatives, this time from inside the Paramount Theater in Rutland, which received over a third of a million dollars in financial support.

“These include community revitalization grants, investments to clean up brownfields, and forgivable loans, and much, much, more,” the governor said of the statewide efforts totaling tens of millions.

Scott reminded everyone that the state is currently working with unprecedented federal support: “Vermont received a historic amount of federal aid coupled with record state surpluses. … That was to grow the economy, make Vermont more affordable, protect the most vulnerable.”

The state in total received more than $5 billion over the span of about two years in federal assistance. 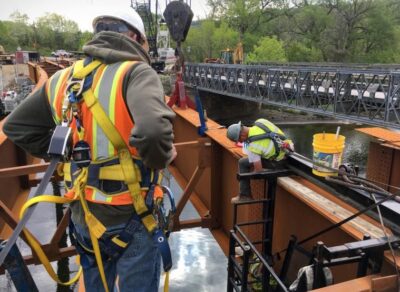 BUILDING UP VERMONT – The state is investing massive amounts of federal money for improvements in infrastructure and downtown development across the state.

Scott continuously stressed the importance of having the hard infrastructure that businesses and residents need to function every day. Scott said this was a priority, “rather than spend the money on one-time programs as some suggested.”

“While I didn’t get everything that I wanted, the legislature largely went along with those initiatives,” the governor said.

Maintaining a viable workforce to utilize these new investments remains one of the primary challenges.

“The unmet need for most businesses right now is workforce,” he said. “That is what everyone is struggling with, and that’s why all the other pieces of this puzzle, all the other buckets that we’ve talked about whether it’s broadband, housing, water, sewer, stormwater infrastructure, climate change mitigation, and so forth is so very important. … If you don’t have staff to take care of the day-to-day workings of a business, that’s a problem.”

He noted that there is ongoing inequality by region in the state, with much of the wealth concentrated in the northwest.

“And in closing that gap, we don’t want to bring Chittenden County or that part of the state down, we want to lift everyone else up, and bringing more economic equity from region to region is a priority for me and my team,” he said.

The state’s most recent report card by The American Society of Civil Engineers was in 2021 when the state received a ‘C’ grade for its overall infrastructure status.

“We did recently announce the approval of an initial round of 16 [applicants] which represented $3 million of grants for projects that support communities’ recoveries in six different counties,” she said. “And today we just approved the next slate of about 12 more applications for another $3.5 million.”

Among these projects are museums, performance venues, language support centers, and more.

This is part of the $57 million “State’s Small Business Credit Initiative.”

“We’ve never before had an opportunity quite of that size and magnitude,” she said. “This will give us the opportunity to have venture capital for early stage, growth stage, seed stage entities. Half of that will go to venture capital and the other half to loan participation.”

Like Scott, she talked about the importance of focusing in on hard infrastructure.

“We are particularly interested in water and wastewater infrastructure projects that will help spur economic development projects for housing projects,” she said.

She said the maximum award for these projects would amount to $1 million dollars or 20% of the total cost.

Some of this money will be allotted based on the race of the applicant, such as with the Economic Empowerment Program.

“It’s $250,000 available for business coaching for BIPOC business owners and workers operating in the private sector,” she said.

“This is is people who want to remediate contaminated properties and these exist all over the state,” she said of the brownfields.

Eric Mallette, the executive director of the Paramount Theater, talked about the importance of getting this assistance.

“The $345,000 investment that Paramount has been granted by the Capital Investment Program represents a considerable meaningful peace of our overall fundraising campaign but also a vote of confidence in support of our region’s success,” Mallette said.

Images courtesy of Paramount Theater and Vermont Agency of Transportation