By Elyssa Koren | The Daily Signal

In blatant violation of international law, the United Nations Office of the High Commissioner for Human Rights has unveiled a startling new campaign that claims “you have human rights since birth.”

The unsettling image, which depicts a baby’s arm with the statement written on a hospital bracelet, makes clear the position of this U.N. body — human rights should not be afforded to human beings until after they are born.

Abortion advocates might applaud this claim, but the position of the body flies in the face of established, and binding, international law on the rights of the unborn. 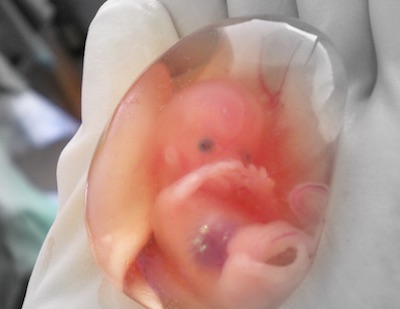 HUMAN RIGHTS: The time has come for increased accountability for the Office of the High Commissioner for Human Rights — the rights of the unborn all around the world are at stake.

As the U.N. body in charge of human rights, the Office of the High Commissioner for Human Rights is mandated to uphold the international legal framework. Deploying the poster at strategic vantage points at the U.N. in Geneva serves as a provocative, and jarring, assault on the fundamental principle of the right to life enshrined in international law and the countries that continue to defend it.

The Convention on the Rights of the Child, the pre-eminent international treaty on children’s rights, leaves no room for ambiguity in its preamble. “The child, by reason of his physical and mental immaturity, needs special safeguards and care, including appropriate legal protection, before as well as after birth,” it states.

Other international treaties unequivocally reference the right to life of the unborn, such as the International Covenant on Civil and Political Rights. In this treaty, the death penalty is prohibited for pregnant women to “save the life of an innocent unborn child,” as explained in its accompanying interpretative documents (A/C.3/SR.819, paragraphs 17 & 33).

Although shocking, the ease with which the office goes against international law is not without precedent. Led by a high commissioner for human rights who functions largely without check, the office frequently has veered into areas that lack member state approval, running multimillion-dollar campaigns and issuing policy recommendations that overtly contravene international law, not to mention the will of member states.

Countries are subjected to regular policing in which they aggressively are urged to change their laws on matters that fall under domestic jurisdiction and have no bearing on human rights.

It is difficult to navigate the fine line between respect for a state’s self-determination and the urgency of U.N. interference when human rights are at stake, but the activities of the human rights office far surpass the work of ensuring fundamental human rights.

The new round of posters, tied to the 70th anniversary of the Universal Declaration of Human Rights, reveals just how far the office is willing to go in its mission to overhaul international law to further a nonconsensual activist agenda that defies the traditional, religious, or ethical values that so many countries and peoples hold sacred.

The declaration, as with the other founding documents of international law, was expertly drafted to protect these values and leave room for crucial national self-determination. It is a great irony that the campaign is tied to the declaration, which is still considered the most important reference point on human rights today.

The mandate of the Office of the High Commissioner for Human Rights is to promote and protect human rights and to coordinate the many human rights mechanisms of the United Nations to monitor and improve member states’ compliance with the treaties they have signed.

It claims to be an “objective voice” on human rights, but it regularly issues highly coercive recommendations to states under the guise of human rights and uses a complex network of special rapporteurs, independent experts, and working groups to aid with enforcement.

These procedures are purportedly impartial and autonomous, but the human rights office’s efforts to force countries to change their national laws on an array of highly sensitive social issues demonstrates a marked disregard for state sovereignty.

Much of the lack of accountability surrounding the office stems from the inherent tension in monitoring human rights. By its very nature, the task of overseeing countries’ human rights records requires a fair amount of independence. The office must be free to make unbiased assessments regarding what is going with human rights at the country level.

But the subsequent autonomy that it enjoys has resulted in a flagrant disrespect for the very international legal documents that it was created to uphold. As evidenced by these posters, the time has come for increased accountability for the Office of the High Commissioner for Human Rights—the rights of the unborn all around the world are at stake.