1997 was the year Act 60, Vermont’s statewide education property tax, was passed. This was the beginning of the end of local control of schools in Vermont and the start of rapid decline in student population. Since then, education costs have gone through the roof and the education bureaucracy has become an expensive, power hungry, gluttonous monster. 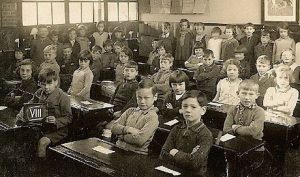 Education has changed a lot since the 1930s, but some would say not for the better.

Education property taxes are out of control, yet student performance continues to decline. The removal of local control by our elected representatives, senators and past governors has coincided with the centralization of power in Montpelier. Mandates from both the state and federal government are significantly driving up costs.

Clearly, this approach to educating the youth of Vermont is failing. The ruling elite of all parties in Vermont have doubled down on this approach with the coercive and tyrannical Act 46. The political promises of reduced costs, lower taxes, equality of education and increased opportunities were false. The exact opposite result is happening. The next phase of Act 46 will be Gov. Scott’s school closing commission.

In my little town of Cavendish, the taxpayers this year are sending an extra $365,000 to the state of Vermont education fund for “redistribution.” Cavendish, Ludlow and many other small Vermont towns have been dealing with this arrangement for two decades. Despite the siphoning of funds away from our local schools and towns, the ruling class in Montpelier is telling us our small schools are too expensive and must be closed.

This for me is unacceptable. It is time to return to what works. It was not that long ago that the public liberty was powerful oxygen in the blood of every Vermonter. Generations of parents, grandparents, aunts, uncles, brothers and sisters built rural schools for the children in their towns. These are the real stakeholders. It is local citizens, local taxpayers and local voters that have the absolute right to determine the sustainability of our rural schools.

The bureaucrats and politicians claim they have greater wisdom in educating our children than those of us with the most invested. They are wrong. They have proven repeatedly that it is never a good idea to have school governance too far away from direct education of students. This is an election year; it is also a good idea to research the candidates you are voting for.

2 thoughts on “Lindberg: For educating Vermonters, it’s time to return to what works”