“Hit New Stock Market record again yesterday, the 20th time this year, with GREAT potential for the future,” he tweeted. “USA is where the action is. Companies and jobs are coming back like never before!” 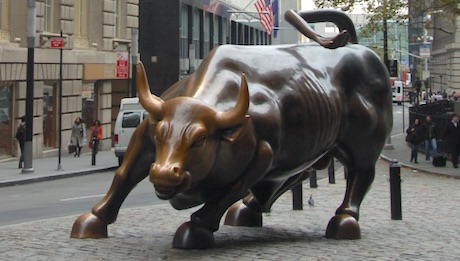 In October 2016, CNN reported that “If Donald Trump wins the election, U.S. stocks (and likely many other markets overseas) will almost certainly tank.”

Both the Dow Jones Industrial and the S&P 500 posted new all-time highs, with the Nasdaq Composite posting a slight drop.

The new mark came two days after Trump delivered a speech to the Economic Club of New York. Trump told Wall St. executives and economists that a Democratic victory in 2020 would endanger the stock market gains made under his presidency.

“I am proud to stand before you as president of the United States to report that we have delivered on our promises and exceeded our expectations by a very wide margin,” the president said. “We have ended the war on American workers, we have stopped the assault on American industry, and we have launched an economic boom the likes of which we have never seen before.”

The Dow’s previous highest closing record was 27,292.63, on Nov. 5, following the record set the day before.

In October 2016, CNN reported that “If Donald Trump wins the election, U.S. stocks (and likely many other markets overseas) will almost certainly tank.”

“Macroeconomic Advisors predicts an 8% fall in the U.S.,” CNN added. “A new paper out Friday from the Brookings Institute projects a 10% to 15% nosedive.”

As of November 2019, the S&P 500 is up by roughly 36 percent and the Dow Jones Industrial Average has gained approximately 40 percent, analysts point out.