The Coventry landfill on the state’s northern border has been in an ongoing conflict with environmentalists over the years, but now there’s finally some agreement with at least one of the dump’s main opponents.

The landfill was issued an Act 250 permit in approval for a 51-acre expansion back in July, and last month the Agency of Natural Resources Department of Environmental Conservation provided a solid waste certification for another decade, as well as for an expansion on the landfill’s south side.

The environmentalist group Don’t Undermine Memphremagog’s Purity (DUMP) originally appealed the solid waste certificate. However, the group has come to a deal with New England Waste Services of Vermont and has dismissed the appeal. DUMP was mainly concerned with air and water pollution as well as traffic impact. 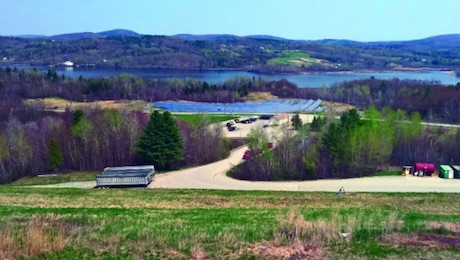 GETTING BIGGER: The Coventry landfill has been battling environmentalists as it tries to expand for at least another decade into the future.

“It is inconceivable that the Vermont Agency of Natural Resources approved a permit to increase the size of this landfill after releasing the data on PFAS toxins in the leachate, and knowing the issues that have developed in Bennington,” DUMP had written in a press release prior to the agreement.

In exchange to drop the appeal, the landfill will work to improve odor maintenance and management of leachate, which has many environmentalists concerned about its impact on nearby Lake Memphremagog. That lake is a drinking water source shared by both Vermont and Canada.

“We’re looking certainly for ways to improve the way leachate or wastewater is processed, we’re willing to do that and I think we’re going to share some of those findings with the state soon,” Casella Vice President Joseph Fusco told True North in October.

He added that most of the leachate getting into the lake comes from sources north of the border where environmental standards aren’t as strong as they are in the U.S.

One concern was that Casella Waste Systems, the parent company that owns the landfill, was having leachate be treated at a wastewater treatment plan on the Clyde River that feeds into Memphremagog. The state found increased levels of PFAS, a common pollutant in leachate, near the landfill. The levels are still within the range that the state deems permissible.

The Conservation Law Foundation is another opponent to the landfill that remains opposed to the expansion.

“Expanding the Coventry Landfill is bad on all counts – for Vermonters, for the environment, for the state’s Zero Waste programs, and for those who drink the water downstream,” they wrote in a commentary.

The Coventry landfill, the last operational one in the state, currently takes about 80 percent of all waste in Vermont.

Fusco said that the state has always been with the landfill through its testing processes.

“We were given our permit by both the agency [Agency of Natural Resources] and Act 250, I think we had kept quiet during much of that process to let the process play out as it’s supposed to,” he said. “And having gone through that process, Act 250 as it often is, is responsive to political concerns, not just scientific concerns. Having heard all the evidence and taking all the testimony, they realized that this facility is well run and has no adverse impact.”

The state toxicologist, Sarah Vose, of the Department of Health also told True North last month that the landfill is safe.

“In the case of PFAS levels in the leachate from the Coventry landfill, the Vermont Department of Environmental Conservation determined that the levels of PFAs present in the leachate would not lead to a measurable increase in human exposure,” she wrote in an email.

Fusco re-emphasized that that notion.

“The facts and the science are clear, this is a state-of-the-art landfill run to the highest of standards in a state where standards are very high,” he said. “It is an important piece of infrastructure for managing health and safety in the state.”

Other stats include in 2017 the largest material waste produced in the U.S. was paper and cardboard at 25 percent. Next was food waste at 15.2 percent, then yard waste at 13.2 percent.

While the total amount of waste produced by society rose significantly from 1960 to 2000, since that year carbage tons have leveled off only slightly increased over the past two decades.