President Donald Trump announced the United States will suspend travel from most of Europe for 30 days beginning Friday to help halt the spread of the coronavirus.

Trump also unveiled some executive actions and several high-dollar spending measures that he is asking Congress to enact. His announcement Wednesday night came hours after the World Health Organization declared the new coronavirus to be a pandemic. 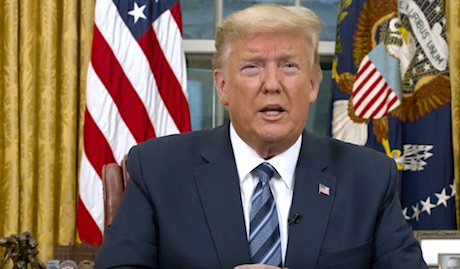 President Donald Trump, speaking from the Oval Office on Wednesday night, announced that the U.S. is suspending travel from Europe to the United States for 30 days.

“Smart action today will prevent the spread of the virus tomorrow,” Trump said in a prime-time address to the nation from the Oval Office.

He later added: “We made a lifesaving move with early action on China. Now we must take the same action with Europe. We must not delay.”

As of Wednesday, there are 938 cases of coronavirus disease, or COVID-19, in the United States across 38 states and the District of Columbia, with 29 deaths, according to the Centers for Disease Control and Prevention. Actor Tom Hanks and his wife, actress Rita Wilson, announced they have coronavirus. And the NBA suspended games after a Utah Jazz player tested positive.

Trump noted that the United States quickly suspended travel from China after the outbreak of coronavirus in Wuhan spread. However, he said the European Union “failed to take the same precaution.”

As a result, the virus came from Europe into the United States through travelers, the president said.

“After consulting with our top government health professionals, I have decided to take several strong but necessary options to protect the health and well-being of all Americans,” Trump said.

To keep new cases from entering our shores, we will be suspending all travel from Europe to the United States for the next 30 days. The new rules will go into effect Friday at midnight. These restrictions will be adjusted, subject to conditions on the ground. There will be exemptions for Americans who have undergone appropriate screenings.

Trump said the restrictions won’t apply to the United Kingdom.

The president also announced financial assistance measures he has touched on previously.

“To ensure working Americans can stay home without fear of financial hardship, I will soon be taking emergency action which is unprecedented to provide financial relief,” Trump said. “This will be targeted for workers who are ill, quarantined, or caring for others due to coronavirus. I will be asking Congress to take legislative action to extend this relief.”

In a call for calm as the markets have rumbled, Trump said: “This is not a financial crisis. This is just a temporary moment of time that we will overcome together as a nation and as a world.”

Trump talked about eliminating the payroll tax, which he’ll have to rely on Congress for.

“I am calling on Congress to provide Americans with immediate payroll tax relief. Hopefully they will consider this every strongly,” he said.

“These low-interest loans will help small businesses overcome temporary economic disruptions caused by the virus,” Trump said. “To this end, I am asking Congress to increase funding for this program by an additional $50 billion.”

The president added that the Treasury Department will defer tax payments without interest or penalty for certain individuals or businesses.

“This action will provide more than $200 billion of additional liquidity to the economy,” he said.

One thought on “Trump suspends travel from Europe, offers financial aid for coronavirus”