“We condemn all crimes against people of faith, and today we are launching another historic action to promote religious freedom,” Trump said at a National Day of Prayer ceremony in the Rose Garden before signing the executive order to create a White House Faith and Opportunity Initiative. 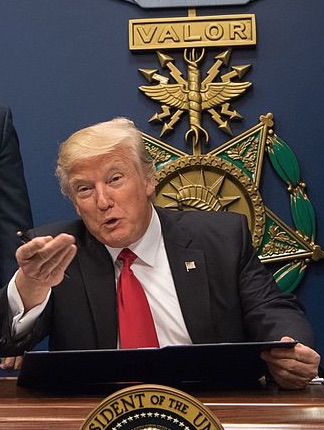 “The faith initiative will help design new policies that recognize the vital role of faith in our families, our communities, and our great country,” the president said. “This office will also help ensure that faith-based organizations have equal access to government funding and the equal right to exercise their deeply held beliefs.

The White House initiative will be made up of faith leaders and experts on charity and religious freedom from outside the government and will be led by the newly created position of adviser to the White House Faith and Opportunity Initiative.

It will make recommendations about providing services to the poor and to apprise the Trump administration of any executive branch failures to comply with religious liberty protections under law.

During his remarks in the Rose Garden, the president talked about the Rev. Billy Graham, the legendary evangelist who died earlier this year, and the Rev. Martin Luther King Jr., the iconic civil rights hero assassinated 50 years ago in 1968.

“Today, we remember the words of Reverend Graham, ‘Prayer is the key that opens us to the treasures of God’s mercies and blessings,’” Trump said. “Always beautiful, and when he said it, it meant so much. When I say it, it means something, but I liked when he said it better. … I think he did that a little better than I do.”

Faith has shaped our families, and it’s shaped our communities. It’s inspired our commitment to charity and our defense of liberty, and faith has forged the identity and the destiny of this great nation that we all love.

A Family Research Council analysis released Wednesday found the religious freedom executive order Trump issued in May 2017 allowed charities and other entities to provide up to 13.7 million people with health care and other social services, and enabled at least 44 schools that provide education for more than 148,000 students to continue operating.

“The announcement of President Trump’s faith initiative is further evidence that this administration is not only committed to protecting our first freedom, but in also acknowledging that our faith in God contributes to the guidance and well-being of our country,” said Tony Perkins, president of the Family Research Council, a social conservative advocacy group.

“I look forward to working with the president to make sure the community of faith will be able to bring hope and help to people in the United States and around the globe,” he said in a statement.

However, Americans United for Separation of Church and State contends the executive order will instead trample on religious freedom.

“Our government should protect religious freedom, not use it as a sword to harm others,” Rachel Laser, the group’s president and CEO, said in a statement. “Our country is strongest when we are all free to believe, or not, as we see fit and to practice our faith without hurting others.”

Executive departments and agencies will designate a liaison to the White House faith initiative.

Similar initiatives were begun under the previous two administrations.

The executive order on Thursday shows that Trump understands the benefit of the government partnering with faith-based groups, said Andrea Picciotti-Bayer, legal adviser for the Catholic Association, a group advocating the rights of conscience and religious liberty.

“The order also restates the government’s commitment to protect freedom of conscience and religious liberty by increasing oversight of federal programs,” Picciotti-Bayer said in a statement. “Everyday Americans respond to God’s call to serve, offering their time and talents to aid and assist their neighbors. People of all faiths, and those with no faith at all, find compassion and professionalism in the care they receive from groups motivated by faith.

“Today’s executive order hails their work—a wonderful product of the rich religious pluralism of our country,” she said.