A New York court ordered AG Eric Schneiderman Thursday to fork over public information about elements of his climate crusade to a libertarian think tank in Washington, D.C.

New York Supreme Court ruled in favor of the Competitive Enterprise Institute (CEI) in a case involving a series of documents conservatives believe could reveal a coordinated campaign against global warming dissenters. Schneiderman has consistently used his state’s Freedom of Information Law to block past requests. 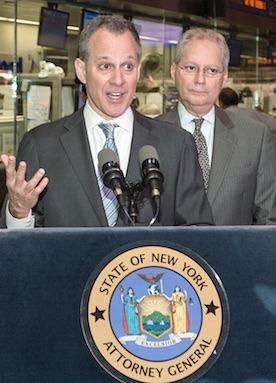 “The Appellate Division is the latest court to reject the attorney general’s bogus excuses for hiding information from the public,” CEI attorney Anna St. John said in a press statement announcing the decision. “We hope this ruling will encourage the attorney general to be more transparent about his office’s activities.”

CEI requested the documents — which could show whether Schneiderman worked with other states or environmental activists to subpoena global warming dissenters — after the Virgin Islands AG in April 2016 hit the think tank with a subpoena for 10 years of emails and donor records.

The think tank has won similar cases against Schneiderman in the past. Acting Supreme Court Justice Henry Zwack ordered Schneiderman in November 2016 to hand over so-called common interest agreements CEI requested in May of that year. The crusading AG tried using the FOIL exemption in that case to no avail. Schneiderman has yet to comply with that court’s order.

Schneiderman has sought to use FOIL exemptions in the past to deny conservative groups’ access to documents. The AG used FOIL exemptions to hide emails showing he is colluding with wealthy environmentalists to take down ExxonMobil, E&E Legal claimed in March 2017.

Schneiderman aide Christina Harvey sent an email in October 2016 to her boss and an outside political consultant, Kristie Stiles, the group told Judge Arlene Bluth. Harvey’s email, as well as those sent to other outsiders, should not be protected, E&E Legal argued.