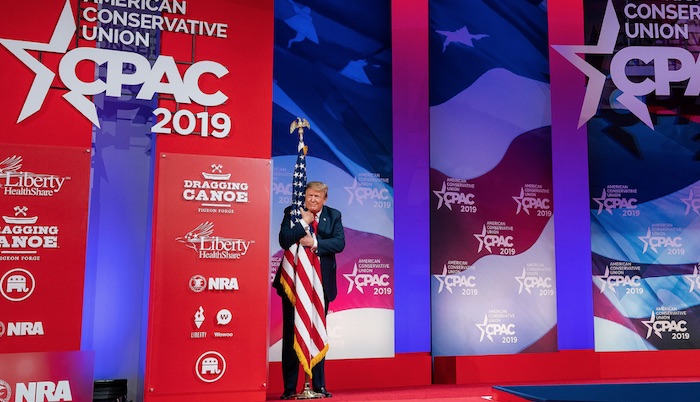 President Donald Trump said Saturday he is “all in” on supporting a constitutional amendment that would make it illegal to burn the American flag.

The two Republicans introduced a constitutional amendment on Friday that would make it illegal to burn or desecrate the flag. Daines has submitted similar proposals in the past, usually to commemorate Flag Day.

All in for Senator Steve Daines as he proposes an Amendment for a strong BAN on burning our American Flag. A no brainer!

Trump has supported criminalizing flag burning in the past.

He said that burning the flag should lead to jail time or loss of citizenship on Nov. 29, 2016.

Nobody should be allowed to burn the American flag – if they do, there must be consequences – perhaps loss of citizenship or year in jail!

Trump was also heavily critical of NFL players who knelt during the national anthem at football games.

“I don’t think people should be staying in the locker rooms, but still I think it’s good. You have to stand proudly for the National Anthem. You shouldn’t be playing, you shouldn’t be there. Maybe they shouldn’t be in the country,” Trump said in May 2018, after the NFL enacted a policy banning players from kneeling during the national anthem.

The proposal by Daines and Cramer is unlikely to see success in Congress. To amend the Constitution, two-thirds of both the House and Senate must vote to formally propose an amendment. Then, three-fourths of state legislatures must vote in favor of the amendment for it to be added to the Constitution.