This article by Chris Mays originally appeared June 12 in the Brattleboro Reformer.

“There was a concern that, particularly after shifting to single stream and in general, because we all know that the markets for recycling have become volatile, that maybe some of that recycling stream was also being diverted into garbage,” Brattleboro Town Manager Peter Elwell said during Tuesday’s Select Board meeting. “Based on the information that we’ve received from Casella [Waste Systems Inc.], who is the processor of our recycling, that’s actually not the case.” 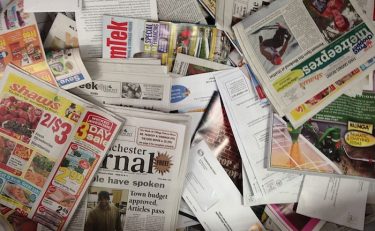 “Newsprint is shipped domestically and overseas depending on the market at the moment, when they’re sending off a shipment of it,” he said. “The reason why it sometimes goes so far away is because overseas, people are still reading newspapers and in the United States, not so much. So there isn’t as much of a market. The newsprint when it gets recycled gets recycled into new newsprint and there isn’t as much of a market for rebuying newsprint in the United States.”

3 thoughts on “Recycling in Brattleboro continues in volatile market”