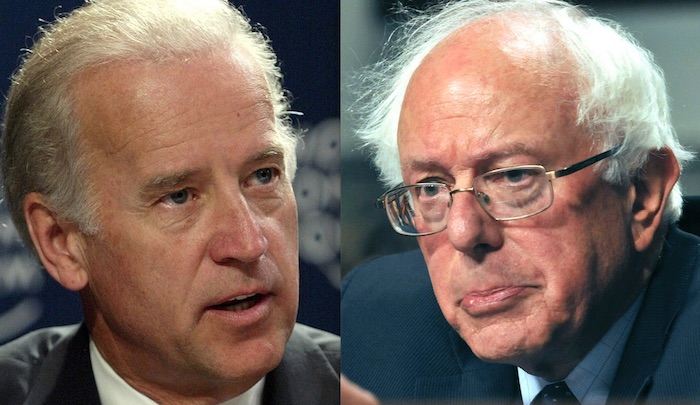 The two frontrunners, former Vice President Joe Biden and Vermont Sen. Bernie Sanders, will appear on the same stage during the June 27 debate.

Vermont Sen. Bernie Sanders is slated to go up in a debate against the only Democratic opponent who has consistently been polling ahead of him, former Vice President Joe Biden.

The Democratic National Committee (DNC) announced Thursday the 20 presidential candidates invited to participate in the first round of primary debates, and a day later the DNC revealed the breakout of who is scheduled to appear on which of the two debate stages.

The two frontrunners, Biden and Sanders, will appear on the same stage during the June 27 debate. The other Democratic candidates who will be at a podium include Sens. Michael Bennet of Colorado, Kirsten Gillibrand of New York and Kamala Harris of California; South Bend, Indiana, Mayor Pete Buttigieg; former Colorado Gov. John Hickenlooper; California Rep. Eric Swalwell; entrepreneur Andrew Yang and author Marianne Williamson.

In order to score one of the debate podiums, candidates must have either received donations from at least 65,000 unique donors (with a minimum of 200 donors in more than 19 states) or received at least 1% support in three DNC-approved polls. Who gets a spot at which debate was reportedly determined by a random draw of the qualifying candidates.

Biden and Sanders have been polling as the two top contenders for the Democratic nomination since as far back as October 2018 before either candidate announced their candidacy. However, Sanders has yet to edge out a lead over the former vice president.

Sanders unsuccessfully ran a 2016 presidential campaign on the Democratic ticket. Although his run was initially considered a long-shot bid, Sanders won 23 primaries and caucuses. He also won more than 45% of pledged delegates, compared to challenger Hillary Clinton’s 54%.

Biden attempted a presidential run twice before. He ran for the Democratic nomination in 1988, vying to become the youngest president since John F. Kennedy. Although a strong candidate, Biden dropped out of the race after instances of plagiarism and mistruths regarding his academic credentials came to light. He withdrew from the 2008 presidential race after a poor performance at the Iowa caucuses.

While Sanders, a self-proclaimed democratic socialist, is portraying himself as the most far-left candidate running, Biden characterizes his campaign as a “return to normalcy” with a more moderate Democratic approach.