Former President Donald Trump filed a lawsuit Thursday against Hillary Clinton, her campaign and the Democratic party over their claims that the Trump campaign colluded with Russian operatives to win the 2016 presidential election. 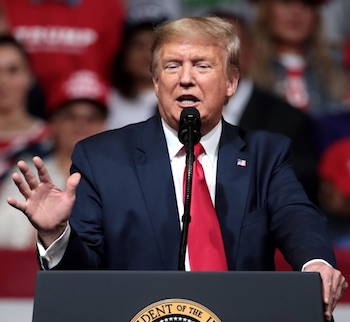 In the lawsuit, Trump asks for punitive damages and compensation for his legal fees, which he says surpassed $24 million.

The lawsuit was filed in a Florida court and levels a range of allegations against the defendants, including hacking, deceiving law enforcement, and creating fake evidence.

“In the run-up to the 2016 Presidential Election, Hillary Clinton and her cohorts orchestrated an unthinkable plot – one that shocks the conscience and is an affront to this nation’s democracy,” the complaint says. “Acting in concert, the Defendants maliciously conspired to weave a false narrative that their Republican opponent, Donald J. Trump, was colluding with a hostile foreign sovereignty.”

Thursday’s lawsuit is the latest in a long-contested political fight over the Russian collusion allegations and how they arose.

In the lawsuit, Trump asks for punitive damages and compensation for his legal fees, which he says surpassed $24 million.

“The scheme was conceived, coordinated and carried out by top-level officials at the Clinton Campaign and the DNC – including ‘the candidate’ herself – who attempted to shield her involvement behind a wall of third parties,” the lawsuit alleges. “To start, the Clinton Campaign and the DNC enlisted the assistance of their shared counsel, Perkins Coie, a law firm with deep Democrat ties, in the hopes of obscuring their actions under the veil of attorney-client privilege. Perkins Coie was tasked with spearheading the scheme to find – or fabricate – proof of a sinister link between Donald J. Trump and Russia.

Trump’s lawsuit comes after John Durham, special counsel for the Department of Justice, alleged in February court filings that the Clinton campaign’s legal team paid a tech firm which was “mining” White House servers to dig up dirt on then President Donald Trump.

“Tech Executive-1’s employer, Internet Company-1, had come to access and maintain dedicated servers for the EOP as part of a sensitive arrangement whereby it provided DNS resolution services to the [Executive Office of the President],” the filing reads. “Tech Executive-1 and his associates exploited this arrangement by mining the EOP’s DNS traffic and other data for the purpose of gathering derogatory information about Donald Trump.”

Michael Sussmann, one of the Clinton campaign’s lawyers, was indicted by a grand jury last year for allegedly lying to the FBI. He has pleaded not guilty.

The FBI said Sussmann lied when he gave them “data files allegedly containing evidence” of a back-channel communication link between Russia and the Trump campaign.

“Sussmann lied about the capacity in which he was providing the allegations to the FBI,” the indictment said. “Specifically, Sussmann stated falsely that he was not doing his work on the aforementioned allegations ‘for any client,’ which led the FBI General Counsel to understand that Sussmann was acting as a good citizen merely passing along information, not as a paid advocate or political operative. In fact, and as alleged in further detail below, this statement was intentionally false and misleading because, in assembling and conveying these allegations, Sussmann acted on behalf of specific clients, namely, (i) a U.S. technology industry executive (‘Tech Executive-I’) at a U.S. Internet company (‘Internet Company-I’), and (ii) the Hillary Clinton Presidential Campaign (the ‘Clinton Campaign’).”