Editor’s note: This article is by Lou Varricchio, editor of the Vermont Eagle. It is republished here with permission.

A University of Vermont team will observe and collect data about interacting disturbances, both natural and man-made, in the zone. 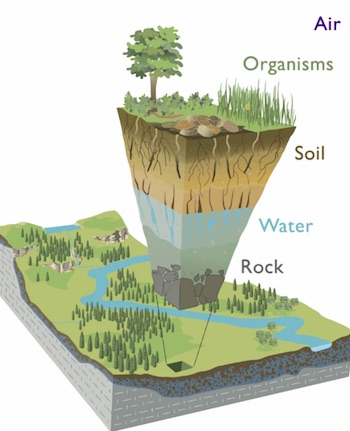 According to a UVM news statement, the team will focus on snow-dominated ecosystems across the United States. The team is made up of researchers and students with disciplines ranging from engineering to soil chemistry

The research project team will collect data and employ earth science and complex systems tools to investigate how short- and long-term disruptions to the critical zone affect its ability to resist and recover.

“We’ll explore multiple dimensions of the critical zone, where essential, life-sustaining processes occur,” says lead investigator (PI) Julia Perdrial, associate professor in UVM Geology and a fellow of the Gund Institute for Environment. “We’re working towards having the data and statistical tools to understand the complex, multiple dimensions that interact to produce the outcomes experienced by people and nature.”

The research project, which includes scholars from four UVM science and engineering colleges plus six Gund fellows, comes at an urgent point in time when the value of science is being put in question by some politicians and sectors of the public more interested in spending money elsewhere.

“One of the primary goals of the project is to educate teachers and K-16 populations of students on the critical importance of science in society today,” according to co-PI Regina Toolin, associate professor in UVM’s Department of Education. Toolin indicated that other projects will investigate the effect of urbanization on the critical zone, processes in deep bedrock, and the relationship to the zone, as well as changes in the coastal critical zone related to climate change such as rising sea levels.