As wildfires continue to ravage California and other western states, a new study from the Goldwater Institute in Arizona and the Mackinac Center for Public Policy in Michigan sheds light on how poor forest management, not climate change that many politicians want to blame, is the real culprit.

“Extinguishing the Wildfire Threat” was written by Jason Hayes, director of environmental policy at the Mackinac Center, which is based in Michigan. Both it and Goldwater are free-market think tanks. 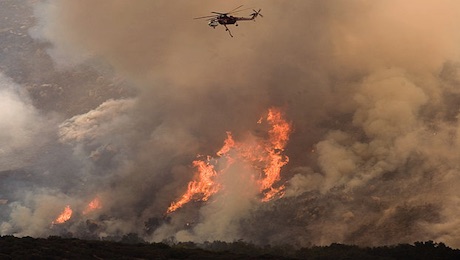 Wildfires continue to burn across Western states, but climate change is not the cause, according to a newly released study.

While Hayes’s study focuses primarily on Arizona, its findings can be broadly applied. He discussed his research during a teleconference Tuesday afternoon.

Hayes referred to the “virtue signaling” of politicians who want to use climate change as a scapegoat for wildfires rather than addressing policy issues.

In recent months, California Gov. Gavin Newsom drew headlines when he told President Donald Trump during a meeting that “climate damn change” is a “real issue.” Newsom last month signed an executive order banning the sale of new gas-powered vehicles in his state beginning in 2035.

In Washington state, which along with Oregon is also experiencing a rash of wildfires, Gov. Jay Inslee said they should now be referred to as “climate fires.”

Hayes questioned why all adjacent areas are not experiencing the same problems, such as in Canada’s British Columbia that borders Washington state.

“I thought climate change crossed borders,” he said, noting that Canada has better forest management policies and has recorded 3,600 wildfires so far this year, compared to 41,000 across the United States.

“The fire triangle is made up of oxygen, fuel and an ignition source,” Hayes said. “You can’t get rid of oxygen and there will always be ignition sources. That leaves fuel as the only thing you can change. To get rid of the fuel you have to go in and clean it up. Driving electric cars isn’t going to do that.”

Hayes referred to the “fuel load” of dead trees, small and unhealthy trees and brush as being the source of the massive wildfires such as what California is experiencing.

“When left alone, nature is going to try and remove that fuel,” he said. “When the fires start, we go in and try to put them out, but we don’t allow human management otherwise.”

Hayes said a combination of conflicting laws and lawsuits filed by environmental activists have led to a “process predicament.”

“State and federal agencies find it so difficult, they say ‘we’re not even going to try,’” he said. “Green groups think forest management is destructive, but which is worse? Wildfires or harvesting and re-foresting?”

3 thoughts on “Study: Poor forest management, not climate change, to blame for wildfires”