By Emma Nietzsche and Amy Swearer | The Daily Signal

March is Women’s History Month, yet Congress appears ready to celebrate in the worst way possible by creating more barriers for women who seek to exercise their Second Amendment right to keep and bear arms.

While COVID-19-related bills have taken up much of the national spotlight, several gun control bills are primed for passage this week in the House. This is hardly surprising, given that just last month, President Joe Biden called on Congress to enact a plethora of new federal gun legislation.

Unfortunately, however, none of these proposals is meaningfully directed at the root causes of gun violence. Many gun control advocates have fooled themselves — and far too many others — into believing that we create safer communities by placing increasingly burdensome restrictions on the Second Amendment rights of law-abiding citizens. 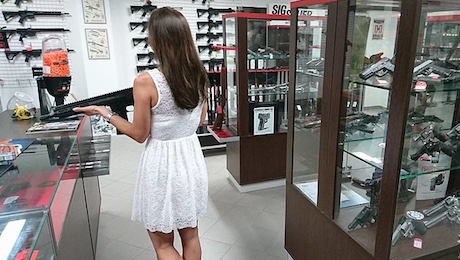 President Biden last month called on Congress to enact a plethora of gun legislation, which would create new barriers for women who seek to exercise their Second Amendment rights.

The reality, however, is that firearms are used far more often for lawful purposes than they are used to commit acts of criminal violence.

Almost every major study on the issue found that Americans use their firearms in self-defense between 500,000 and 3 million times a year, according to a 2013 report by the Centers for Disease Control and Prevention. We have good reason to believe that many of these defensive gun uses aren’t reported to police, much less make the local or national news.

For this reason, The Daily Signal each month publishes an article highlighting some of the previous month’s many news stories on defensive gun use that you may have missed—or that might not have made it to the national spotlight in the first place. (Read accounts from 2019 and 2020 here.)

The examples below represent only a small portion of the news stories on defensive gun use that we found in February. You may explore more by using The Heritage Foundation’s interactive Defensive Gun Use Database.

Everyone wants communities that are safe from gun-related violence and to keep firearms out of the hands of those who are a danger to themselves or others.

But the gun control bills currently before Congress would impose significant and unnecessary burdens on law-abiding Americans who, like those highlighted above, simply desire an effective means of protecting their rights and liberties.

Worse, these gun control bills would not meaningfully reduce the risk that those rights and liberties indeed will need protection. That makes them both constitutionally suspect and bad policy.