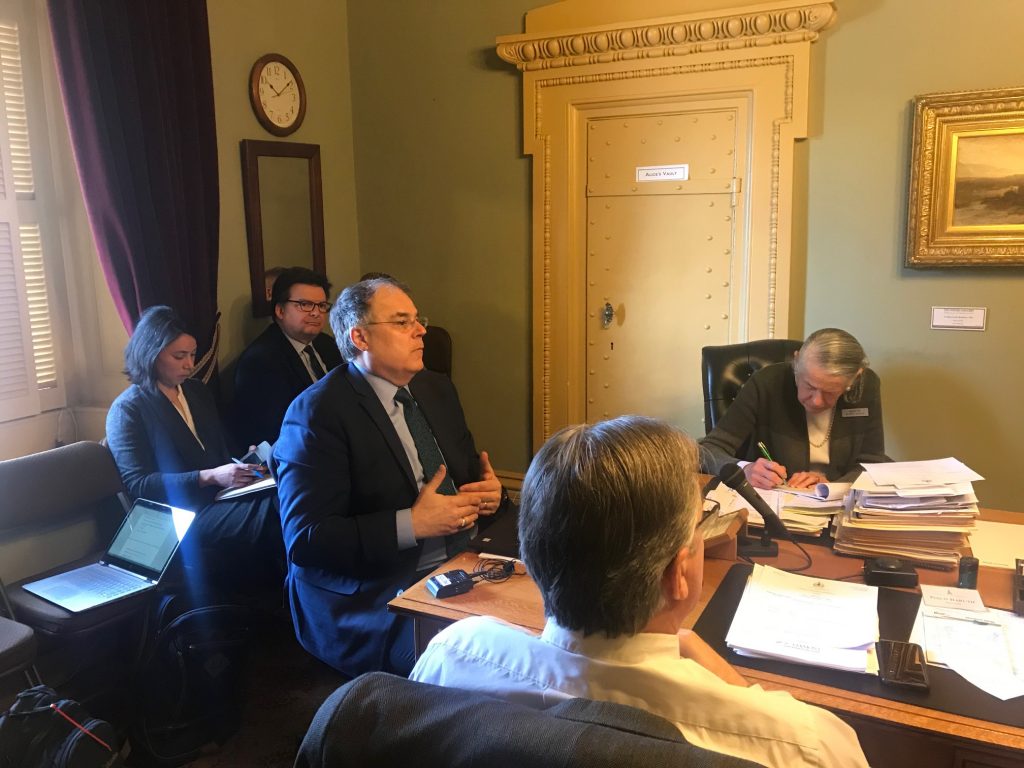 RIGHT WING HATE WEBSITES?: Julio Thompson, director of the civil rights unit for the Office of the Attorney General, told the Senate Judiciary Committee on Thursday that free-speech social media websites such as Gab.com are hotbeds for white-supremacist ideologies.

MONTPELIER — Members of the Senate Judiciary Committee spent part of their Thursday morning discussing “the rise and decline of hate groups” in Vermont and the United States, the topic listed on the day’s agenda.

Senate President Pro Tem Tim Ashe, D/P Chittenden, led things off with opening statements on why he thinks its time for lawmakers to hear about this subject.

“[It’s] in communities all across the state, including Burlington, I know in Brattleboro, or in Connecticut and other communities from time to time. It might be something as low tech as someone putting a flyer somewhere in public,” he said.

He referenced a flier in Burlington put out by Patriot Front, an alleged extremist group. It featured the slogan “Better Dead Than Red” in reference to socialist tendencies in government.

Another speaker to discuss the issue was Netdahe Stoddard, a racial bias literacy interventionist. He told the committee he has worked with about 20 kids who, in his view, hold white supremacist ideologies.

As examples, he cited students concerned about the local spread of Sharia law, an Islamic legal system which imposes strict punishment. He also suggested that students who are worried about losing their constitutional rights are conspiracy theorists.

Skyler Nash, a black student-athlete at the University of Vermont, spoke about his experiences with race relations in Vermont. He said when he first arrived at school he met with students of color and discussed the predominantly white population of Vermont.

“I wanted to get a hint on what was going with Vermont, and one thing that they shared with me, and I came to realize myself, is that you have a lot of well-intentioned people who want to help, and when talking about race they say, ‘Well I don’t look at race, I don’t see color.'”

Nash continued, “And to them it’s like a really good thing, but the students in the black student union and myself are trying to have conversations with people and it becomes a huge problem because the reality is that we’re in a highly racialized society.”

He described his past experience going to a predominantly white school in Chicago, where he encountered “microaggressions” when white people would try to touch his hair or compare the darkness of their skin tone after a day at the beach.

Julio Thompson, director of the civil rights unit for the Office of the Attorney General, said young people are getting brainwashed by alternative media.

“There are numerous websites and social media that cater to ideologies of racial hatred, anti-Semitism, Islamophobia, homophobia,” he said. “And those are accessible now in the advent of portability and smartphones. And there’s little that parents can do once their children are out in the world and get a handle of what’s on those phones.”

As an example, Thompson cited Gab.com, a social media website that bills itself as a free-speech alternative to Twitter and Facebook, which have been accused of censoring conservative voices.

“They would look at certain websites that cater to hate ideologies, such as Gab, for example,” he said. “It’s like Twitter but it’s completely unregulated and you can search for how many anti-Semitic or racist statements that were made in the light of certain speeches made by national figures.”

Vermont State Police Lt. Garry Scott, who attended the meeting, told True North outside the committee room that police have the ability to distinguish between actual hate crimes and hate crime hoaxes, such as the one allegedly carried out by actor Jussie Smollet in Chicago.

“[We make a determination] through investigation — so, just like in Chicago, where they started off in one direction and through the course of that investigation it turned in a different direction. And that’s what it would ultimately be coded as.”

Lawmakers did not discuss the topic as related to any particular bill. None of the committee members present questioned the narrative that racism is pervasive in Vermont.