Vermont’s special session has the potential to steer our state in the right fiscal direction for years to come, or it could leave us with a disastrous government shutdown.

Gov. Scott’s “no new taxes” pledge is on a collision course with the legislative leadership’s desire to pay down Vermont’s underfunded pension accounts. But this doesn’t have to be an either/or scenario. In fact, it should be “both.”

First, the governor’s “no new taxes” pledge. A governor that vocally opposes higher property and income taxes is better than having a governor who is ambivalent about the subject. We can be thankful for that. However, leadership has a point about the use of one-time funds to prevent property taxes from increasing not being ideal. Vermont can’t count on receiving a $35 million settlement from the tobacco industry and $44 million from unexpected tax revenue every year. 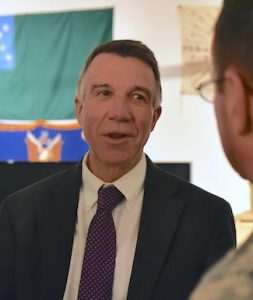 Gov. Phil Scott pledged no new taxes or fees during his campaign for governor, and this year marks the second legislative session for which he has shown a willingness to stand by his word and veto pen.

Vermont is not an island. If the second longest U.S. economic expansion on record suddenly turns into a recession, spending will have to decrease or else taxes will increase. The more sound approach would be to figure out a way to structurally lower education spending overall.

Scott’s does do this over the long term, presenting a plan to restructure Vermont’s education system, with potential net savings of around $300 million over five years. The proposal has its detractors, but if his $60 million annual reduction in education spending is a good estimate, that is a starting place.

Acknowledging Scott’s leadership does not have to detract from our legislative leaders’ proposal to pay down the pension fund. House and Senate leadership have advocated using $34 million of the revenue windfall to pay down our unfunded employee and teacher pension liabilities. That proposal is a good conversation starter with taxpayers as to how we might pay our retiring teachers and other employees. According to Vermont’s Joint Fiscal Office (JFO), Vermont has not planned on how to pay for the nearly $4 billion in pensions and retirement benefits, as of June 2016. This number is larger now, and will only continue to grow so long as Vermont fails to cut government spending and keeps taxes where they are.

If Vermont’s pensions and benefits increase to the point that creditors doubt Vermont taxpayers will ever be able to foot the bill, interest rates on our bonds will skyrocket and Vermont would be forced out of necessity to increase taxes and dramatically cut public services, something that neither Republicans or Democrats would enjoy. We need only to look at the situation in Illinois. After the state’s powerful unions prevented Illinois from decreasing its pensions and benefits, the state’s bonds have become next to worthless.

And for the progressives who say “we can just raise taxes” if this worst-case scenario for pensions comes to pass, our “service level solvency” ranks 48 out of 50 states. This means that, in the event of a drop in revenue from a recession, Vermont’s economy would be hard pressed to remain afloat after tax increases, leading to more incomes leaving Vermont, with even higher taxes for those who remain.

If we were to assume the best of Gov. Scott and legislative leadership, both sides would use this special session to work together to pay down Vermont’s pension accounts, lowering property taxes permanently, and finding ways to cut out non-essential government programs, thus avoiding a government shutdown.

While neither side likes the shutdown scenario, the hard lines put forward by both sides leave this open as a distinct possibility. If Scott and the legislature fail to reach a compromise by June, no emergency funds can be taken from the state treasury without legislation, as stipulated by the Vermont Constitution. This being the case, we could see a shutdown sometime in July. While some fiscal libertarians might rejoice, even the most basic of government services could be affected, such as law enforcement and nursing, leaving thousands without the care they need.

Worse still, a shutdown could exacerbate the pension crisis. Interest rates on state bonds would rise, making it more difficult for Vermont to borrow money for our unfunded pension, thus raising the specter of higher taxes and reduced government services in the years to come.

Vermont is in a precarious position. For years, Vermont’s government leaders have chosen to look the other way in regards to our uncompetitive tax rates are and unfunded pensions. Voters haven’t held them accountable because the the long term consequences of these policies haven’t been felt in the context of a strong national economy.

If we do nothing, our high tax rates and underfunded liabilities will slowly siphon enough capital away from Vermont that we will begin to look upon the past couple of decades as the glory years. Not a pretty thought if you look at the lack of development in the more rural parts of our state.

So, here’s hoping that in this special session two rights don’t make a wrong, and that both sides get what they want.

9 thoughts on “Flemming: The governor and leadership are both right”