Last week’s Climate Strike mercifully stopped short of massive civil disobedience, but it’s worth taking a look at the organization that collaborated with 350.org and VPIRG to train Vermont youths to do that. Ken Braun has done  that in a recent report from the Capital Research Center. 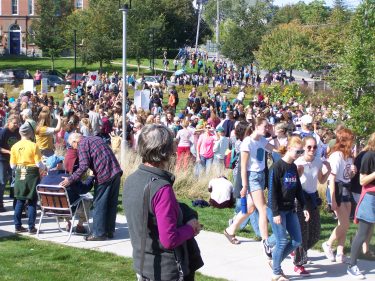 Climate Strike: Hundreds of college, middle- and high-school students gathered in Midlebury on Sept. 20 to demand an end to fossil fuels.

“Last April the UK based Extinction Rebellion — known as XR — was already strong enough to deploy thousands of demonstrators onto the streets of London. In the process, they invaded a handful of major traffic thoroughfares, blocked them, and held them for eleven days. The uprising snarled traffic, required the deployment of 10,000 police officers … and led to more than 1,100 arrests.”

“Extinction Rebellion announced its goal to ‘shut down London.’ It turned up the heat and called for reinforcements: ‘This movement is the best chance we have of bringing down capitalism. Get on board…’ That last, perhaps too-revealing tweet was later deleted.”

“Extinction Rebellion co-founder Roger Hallam declared  ‘We are going to force the governments to act. And if they don’t we will bring them down and create a democracy fit for purpose. And yes, some may die in the process.’”

Vermont’s ingenuous climate protesters, and their enablers at 350.org and VPIRG,  should rethink their alliance with radical revolutionary groups like XR.