A top item of discussion among world leaders at this week’s United Nations meetings was how to get countries to comply with the Paris climate accord.

Well that certainly is a tricky problem for the climate change lobby — which sees the Paris accord as our last-ditch hope to save the planet. As it turns out, FEW of the signatory nations to the Paris climate accord are meeting their solemn promises. As of last year, only five European nations were even within 50% of their target reductions. Asia is a bigger disaster. China’s and India’s emissions are getting much worse; they are building coal plants every week. 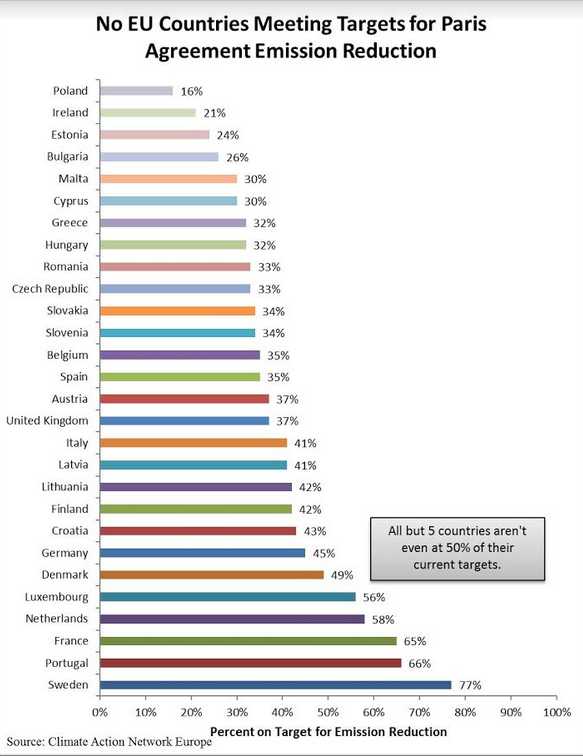 Two years after pulling the U.S. out of the Paris scam treaty, it is President Donald Trump who now looks like the prophet. Trump knew the inconvenient truth that so many in the U.S. government, starting with former President Barack Obama who so wanted the treaty to work, chose to ignore. Few, if any of the other nations — least of all the Chinese — had any intention of slowing their economies to pay homage to the gods of global warming. The Paris Agreement was little more than a $100 billion shakedown of the U.S. for more foreign aid money to the rest of the world.

Trump is still cast by the Europeans, Asians, Canadians and the American press as the climate change villain. He is, as the left says, “a denier.” But the denial that is going on — or should I call it the grand fraud — is that the multi-billion-dollar Climate Change Industrial Complex is pretending that the Paris climate accord is a wondrous success showing the power of the U.N. and “collective action.” So far, the treaty has been just the opposite.

Hollow promises, all sound and fury, but no action, are why the constant verbal spankings directed at Trump and the American delegation at the U.N. is so farcical.

Meanwhile, what isn’t reported at all, as the U.N. apocalyptics spread doom and gloom about the state of the planet, is that America has done far more than the rest of the world to reduce greenhouse gas emissions. This is because we invented something called shale gas — yes, the same thing that Vermont Sen. Bernie Sanders wants to ban, and former Vice President Joe Biden wants to “phase out.” Shale gas is replacing coal and other inefficient energy sources and it is doing so at low cost.

What irony: The one nation that is not a signatory to the Paris treaty is the nation that has reduced its carbon emissions the most over the past two years.

How many of the thousands of young people demanding swift action and admonishing the U.S. for ignoring the dangers of climate change know this? It’s a pretty good bet that the teacher unions that have used 8-year-olds as foot soldiers in their ideological campaign against fossil fuels have never told these facts to the youngsters.

If we look at the list of nations that are the biggest cheaters on the Paris climate treaty, we see that the more sanctimonious a nation is, the worst offender it is. Spain, Germany and Italy aren’t making much progress, but they sure make grandiose promises to clean up the planet. The leaders in Beijing who are much more interested in becoming the planet’s superpower than combating global warming, are laughing all the way to the bank. Just China’s annual increases in greenhouse gas emissions are greater than the entire annual emissions of Canada each year.

Now we have Vietnam, Indonesia, India and many other Asian nations rapidly developing and thirsting for more low-cost energy. That isn’t going to come from windmills. They build coal and gas plants because they work. They are cheap and reliable sources of electric power that empower their citizens.

A little over two years ago Trump pulled the U.S. out of the Paris accord – keeping a key promise to voters. We now can safely congratulate Trump for a gutsy decision to pull out of a treaty that benefits no one.

Rather than trying to salvage this flawed treaty, it is time to rip it up and move on to environmental policies that work.

If the world leaders who attended the U.N. meetings had an ounce of integrity, they would admit that the Paris accord has been about as successful as the Bay of Pigs invasion. Time to rip it up and adopt environmental policies that work and are cost-effective.

If the rest of the world would follow America’s lead and use more natural gas, the planet would be a much cleaner and wealthier place. Energy poverty is one of the great inhibitors of economic development across the globe and for the wealthy nations to lecture poor nations to use wind and solar power is to deny them the path to better and healthier lives.

Technology, innovation and private enterprise will save the world from ecological disaster. America is proving that, and the rest of the world would be wise to stop lecturing and start following our lead.

5 thoughts on “America is the real climate hero: Natural gas has helped reduce US emissions”