The Extinction Rebellion of the Upper Valley protesters demanded was immediate, overwhelming government response to “climate emergency.” Yet their protest produced long lines of cars driven by disgruntled drivers, who were either idling at stop lights for far longer than usual or backtracking to reach their destinations by some other route than State Street, the “main drag” in Vermont’s capitol city. Apart from the lost work productivity of Montpelier commuters, the event resulted in larger-than-usual carbon emissions. Whether idling or backtracking, the car engines were on longer than the drivers expected. 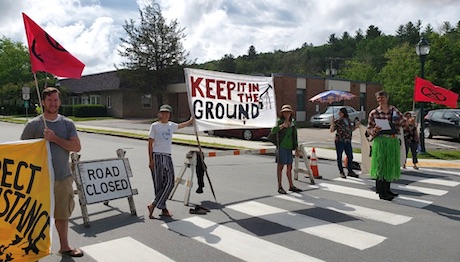 The forced idling of cars is serious business in Vermont. In fact, it is unlawful. Violations are subject to a fine of $10 first offense, $50 second offense, and $100 for incorrigible, recidivist third-offenders. The Legislature passed a law in 2013 limiting the idling of vehicles, or causing the idling of vehicles. Act 57 reads, “A person shall not cause or permit operation of the primary propulsion engine of a motor vehicle for more than five minutes in any 60-minute period, while the vehicle is stationary.” Among the permitted exceptions – rescue, law enforcement, etc. –  protest is not included.

The Vermont Department of Conservation explains why this law is necessary on its “Be Idle Free” web page: “In Vermont, motor vehicles are the largest source of greenhouse gases and a number of other air pollutants that threaten human health and our environment. Unnecessary idling harms human health, pollutes the air, wastes fuel and money, and causes excess engine wear. And it’s against the law.
We estimate that if every car and truck in Vermont reduced unnecessary idling by just one minute per day, over the course of a year Vermonters would save over 1 million gallons of fuel and over $2 million in fuel costs, and we would reduce CO2 emissions by more than 10,000 metric tons.”

It is somewhat ironic that the idle-inducing protest would take place in Montpelier, which is a stakeholder in the Vermont Clean Cities Coalition, a strong supporter of the anti-idling campaign.

It is unlikely that the protest stopped any motorist for as long as five minutes and thus probably did not violate any anti-idling laws. Traffic laws, though, are another story. The protest got the attention of both City of Montpelier and Vermont State police, all of whom told this reporter the protesters were in violation of their permit because they were blocking traffic. At times the protesters seemed to be blocking both lanes of traffic, at other times, they were only blocking one lane. Extinction Rebellion of the Upper Valley spokesperson Simon Bennett (dressed in a green faux grass skirt) said they had a permit, but the police were adamant in saying the permit does not permit them to stop traffic.

“XR” demands that “The Government” reduce carbon emission to net zero by 2025 and “cooperate internationally so that the global economy runs on no more than half a planet’s resources per year.” It adds, “we do not trust our government….and we do not intend to hand further power to our politicians. Instead we demand a Citizen’s Assembly to oversee the changes as we rise from the wreckage, creating a democracy fit for purpose.

You can read more about Extinction Rebellion in the July-September issue of the Green Energy Times (published in Bradford and supported by sponsor AllEarth Renewables, which is owned by renewable power advocate David Blittersdorf). For example, you will learn it’s an international group that shut down London April 15-17 this year. GET also reports the latest climate-related disaster prediction, in a big, front-page headline printed in red ink: “Higher Prices for Beer with Climate Change.”

According to a study published in the journal “Nature Plants”, beer prices could triple as global temperatures make it (purportedly) harder to grow barley. A $9 dollar six-pack could cost $40. Growers may need to move to Canada, but alas even Canada may one day no longer be a place where, to cite the old nursery rhyme, “oats, peas, beans and barley grow.”

Dire predictions of beer inflation are bound to get the attention of thirsty, impressionable young college students. But the human race is a highly adaptive species and no doubt will rise to the challenge. And fortunately, the study says nothing about climate change tripling the cost of a cup of coffee, or a glass of merlot.