While the Scott administration has announced $1.5 million in security boosts for Vermont’s schoolchildren, none of the funds are for armed guards or staff who could shoot back at an attacker.

The second round of funding as part of the School Safety and Security Grant Program is a continuation of Act 42, which passed during the last legislative session. 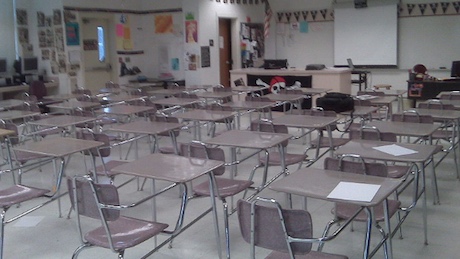 PROTECTED?: Vermont has determined that advanced locks and warning systems – not armed resistance – is the answer to the threat of school shootings.

Vermont Emergency Management director Erica Bornemann told True North none of this money can be used for hiring an armed school resource officer (SRO), or for arming and training a staff member.

“The funding for the School Safety and Security Grants was established in the state capital bill and therefore the expenses must be capital eligible,” he wrote in an email. “This means the funding must be spent on items that have a certain life span and are improvements to a building.

“The SSSG program is just a portion of the overall school safety program in Vermont which includes emphases on planning, training and exercising for all hazards using an options-based approach, community education about violent incidents, and intervention through behavioral threat assessment.”

He added that based on the studies conducted on the topic, having armed officers on school grounds was not deemed a priority: “Funding has not been made available for training school resource officers through the School Safety Center because school safety assessments conducted throughout the state have shown the greater need to be training school staff, teachers, and students on the appropriate response to a potential or active threat.”

School resource officers can be effective in resisting a school shooter. In 2018, three active shooter tragedies led to death tallies of 17 people in Parkland, Florida, and 10 people in Santa Fe High, Texas. But in Great Mills High School in Maryland, where another event occurred, the shooter was able to kill only one victim before an armed SRO intervened and prevented additional murders.

“You train to respond to this and you hope that you never ever have to,” St. Mary’s County Sheriff Tim Cameron told NBC News. “This is the realization of your worst nightmare — that, in a school, that our children could be attacked. And so as quickly … as that SRO responded and engaged.”

According to the American Police Beat, the average time of response in the U.S. for a 911 call is 10 minutes. According to FBI reports, of 64 active shooter cases studies in which the duration of the event was determined, 44, or 69 percent, of those shootings were finished in just five minutes or less.

In the spring, the Department of Public Safety partnered with Margolis-Healy of Williston for school safety planning and training. Margolis-Healy works directly with schools and public safety personnel to work on what’s called standardized emergency operation plans.

A spokesperson for Margolis-Healy has noted that SROs can cost a school budget $70,000 a year or more. In addition to increasing security, they can help with monitoring and interacting with students. As of last year, 30 schools in Vermont used SROs.

As part of the School Safety and Security Grant Program, schools can apply for grants of up to $25,000, which require a 25 percent match. The money can be used for interior and exterior door locks, public address systems and other measures.

Last fall, the U.S. Department of Justice sent $400,000 to Vermont’s Department of Public Safety for a new Vermont School Safety Tip Line among other initiatives.

“These grants are the latest step in our ongoing commitment to ensuring safe learning environments in all Vermont schools,” Gov. Phil Scott said in a statement. “While Vermont remains among the safest states in the country — and our schools are no exception — we must continue to build upon this effort through a comprehensive approach, including enhancing safety infrastructure, training staff to recognize and address threats and concerning behavior, promoting the importance of ‘see something, say something,’ and engaging the whole community to keep our schools safe.”

To apply for grant money, schools should visit www.schoolsafety.vermont.gov, or contact sunni.erickson@vermont.gov. The deadline for applications is Aug. 5.