For the Republican Party faithful living in the Democratic-stronghold of Addison County, an ice-cream social gathering held at the River’s Edge Campground in Vergennes provided a pep rally of sorts for rebuilding the local GOP in advance of the 2020 campaign.

The gathering, held July 18, was organized by former state Rep. Connie Houston, of Vergennes, and Jon Christiano, of Middlebury, chair of the Addison County Republicans. 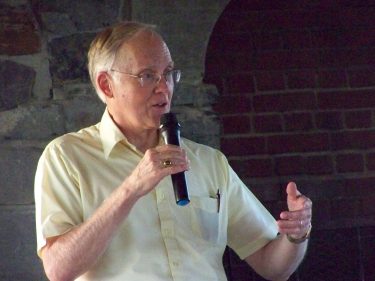 Former Gov. Jim Douglas: “We need people (in Montpelier) who get it, who aren’t going to vote for every spending idea that comes down the pike. We want to instill fiscal responsibility in our state again.”

Before introducing Douglas, both Houston and Christiano welcomed attendees and encouraged them to get involved in local and state politics. Attendees were asked to consider contributing to Republican candidates for 2020 or even running for office themselves.

“We have real opportunities this time around,” Christiano said.

Douglas, a 68-year-old resident of Middlebury, still reads the political tea leaves, not only in his backyard but statewide as well.

Douglas, who served as Vermont governor from 2002 to 2011, began his political career in the state House of Representatives. He was elected secretary of state in 1980 and then state treasurer in 1994. His three terms as governor focused primarily on the economy.

He also was appointed co-chair of the Council of Governors by President Obama in 2010, and is currently an executive-in-residence at Middlebury College, his alma mater.

“There was a time in 1973 when we had only one Democrat from Addison County in either chamber,” Douglas told the River’s Edge audience. “Today, Addison County’s only Republican is Rep. Harvey Smith of New Haven. … Harvey’s ranks need to be enhanced. We need to get ourselves back on track.”

While concerned about Vermont’s supermajority of Democrats and Progressives in the Statehouse, Douglas is not pessimistic about the future.

In anticipation of the 50th anniversary of the Apollo 11 Moon landing on July 20, Douglas echoed the words of history to rally the local GOP.

“As President Kennedy said, ‘We’re going to the Moon not because it is easy, but because it is hard.’ We have to field candidates in every district and then support them; I know we can make progress, but it’s going to be hard work,” he said.

Amid the tumultuous politics of Trump-era Vermont, Douglas offered his analysis of the buildup to 2020 along with his own brand of “hope and change” for the party faithful.

“It’s an interesting time, isn’t it? We had the first Democrat announce for governor already this week, a former education secretary. … I won’t mention her name to increase her name recognition,” he said, getting a laugh from the audience. “It seems kind of an early start to the cycle and I am not sure how she’ll fair. She is the implementer emerita of the school-consolidation law, so I am not sure there’s a big natural constituency there … but this is Vermont — any Democrat starts out with 40 percent basically just for putting a “D” after his or her name.”

Addison County GOP chair Jon Christiano: “We have a real opportunity this time around.”

Douglas praised Gov. Phil Scott’s term in office, though he did not mention the governor by name at any time during the evening.

“We’re lucky to have an incumbent Republican governor who is a fiscal conservative,” Douglas said. “He had accomplishments last session that I can’t even boast of: There were two years without a single tax or fee increase; that didn’t even happen on my watch, I am sorry to say. That’s a tremendous accomplishment; there’s no record of it before in our state’s history. We can be proud of this.”

The former governor spoke of other accomplishments including the thwarting of the $15 minimum wage, which he noted would have cost a few thousand jobs according to the Joint Fiscal Office.

Douglas expressed satisfaction with Scott’s ongoing resistance to the many cost increases in the state budget presented by the opposition.

“He said ‘no’ to a $100 million payroll tax to the family-leave mandate. … It’s not easy to hold back the tide, but he’s doing a great job and we have to make sure he continues to be there to provide some balance to the excesses of our ‘friends’ in the General Assembly.”

Douglas said the Democratic and Progressive supermajority in Montpelier poses a potential “train wreck” for the state.

“They’re trying to do a carbon tax, right? That’s the latest idea,” Douglas noted. “He (Scott) is saying ‘no’ but it’s not easy with the numbers. With a veto-proof majority in each chamber, the Democrats can have their way on any day if they stick together. … So, we’ve got a lot of work to do.”

Douglas noted that in the midst of the current Republican slump in state politics there are some key battles that have been checked by Scott. He cited a decline in the lands-gain tax, a reduction in personal income tax rates, and an increase in the estate tax exemption.

“So we hope fewer of you will become Floridians,” Douglas said. “The governor felt strongly about this; that alone will make a positive difference in making Vermont a little more tax friendly then before. Some good things have happened and bad things have been stopped; it’s a real battle.”

Douglas advised Republicans not to become discouraged by either the facts of the current supermajority numbers or of those seemingly impenetrable Democrat-held districts.

“Some (Republicans) say some Vermont districts are lost causes, so why bother?” he said. “Well, my answer to that is if you throw enough against the wall, something is going to stick. My favorite example is from a couple of decades ago. We had a great candidate in the city of Winooksi where three Republicans live (audience laughs). His name is Tom McCormick. He won and served a couple of terms. He was well respected, worked in the extension service, I believe, and was active in his church. So, it is possible to change the tide.”

Douglas added that a losing game can be turned into a victory with a strategy plus hard work.

“In Middlebury, my old district, we had an independent run four years ago — he came within 100 or so votes of knocking off an incumbent Democrat. So, you can’t write off these districts. … We have to field candidates in every district and then support them.”

Douglas thanked the audience by summarizing it as “a great crowd for an off-year election.” He concluded his address in good humor and with a wry smile and a playful pun: “Let’s party on!”

33 thoughts on “Jim Douglas on the Vermont GOP in 2020: ‘We need to get ourselves back on track’”