They didn’t skip school. They didn’t need any professional organizers or media announcements. None of them sailed across the Atlantic Ocean to publicize their cause. They didn’t chant “down with capitalism.” They didn’t block traffic.

The small gathering of Americans who rallied spontaneously in White River Junction on September 11 to honor the fallen heroes of 9/11 didn’t do anything to bring attention to themselves. Instead, it was all about the first responders who walked into danger, ready to do their duty, and all of the other people who paid the price of freedom on that awful day in September, 2011.

According to a news story posted on 9/11 by Eric Francis of Vermont News on Herecast, Joseph Bublat thought up the idea the night before and shared it on Facebook: he asked his FB friends to gather on Maple Street in White River Junction, with American flags and signs and smiles that demonstrated gratitude for those who served – and still serve.

“Nine-Eleven has always been a really important day.  A lot of people lost their lives and it changed the world.  It really did,” explained organizer Joseph Bublat, wiping away a tear as he added, “I’m sorry, I get fairly emotional about this.  I was on a family road trip with my parents when it happened.  It just seemed so surreal.”

Bublat added, “So I thought it would be really good to bring it back to the community and wave some American flags and give them out to people and just show support for our local EMS and fire department and everybody, just spreading some good will and patriotism basically.”

Some news stories are best told with words, others are living examples of how “picture is worth a thousand words.” The photographs in Francis’s story are worth many thousands of words. 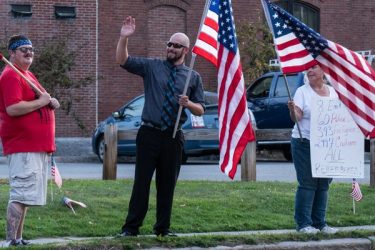 Vermonters held American flags and marked the remembrance of the first responders who died on 9/11.

Critics of today’s youth Climate Strike protests in Montpelier can perhaps be consoled by the fact that the same First Amendment of the U.S. Constitution that recognizes the inherent right of high school students to peaceably protest recognizes the same right for Bublat and his friends to gather, wave Old Glory, and remember, while reminding the rest of us to, as one sign declared, “Never Forget.”

The Vermont State Police reported Thursday Sept.19 at 3:27 pm that, yet again, a tractor-trailor tried to get through Smuggler’s Notch and – you guess it! – got stuck in the hairpin turn at the top.  It took a while, but later in the day the truck was moved to the side enough so that traffic could get through – albeit much more slowly.

Signs on Route 108 and GPS practically scream “truckers, don’t drive through the Notch” but somehow, a small number of professional drivers seem to think they will succeed where others failed – or better yet, just drove around.