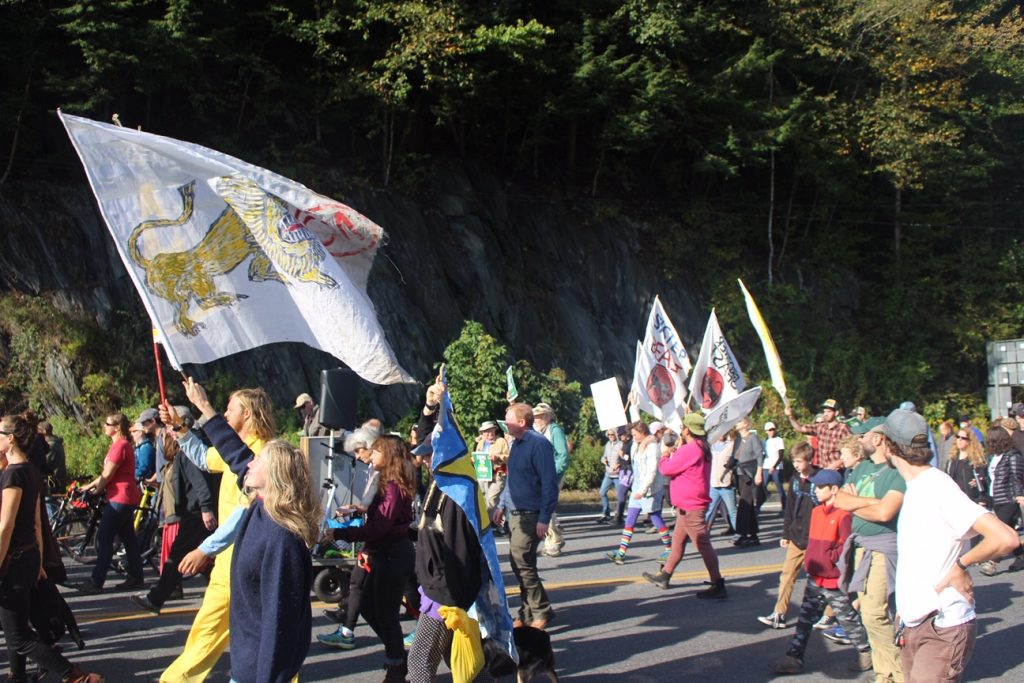 STOPPING TRAFFIC: Midtown Montpelier came to a halt for a few hours Friday morning as the Global Climate Strike march came through, which was mostly comprised of young students skipping class.

MONTPELIER — To show support for the capital’s version of the Global Climate Strike, at least one major high school let students skip school and won’t count it as an absence.

The event was highly coordinated. Kids gathered at school, received basic instructions on what to do if arrested, and then proceeded to chant and sing as they walked down River Street. They ended up at City Hall for a “die-in,” meaning they laid down in the street and made chalk outlines around themselves to symbolize their death by climate change.

Several students chatted with True North as they marched.

Tobin Durham, a Montpelier High sophomore, said it’s important for everyone to get out and march.

“It’s a big problem and if you are not out here you are ignoring it,” he said.

Asked if his school taught broad perspectives on energy use, such as the higher cost renewable energy or driving electric vehicles, he said no. 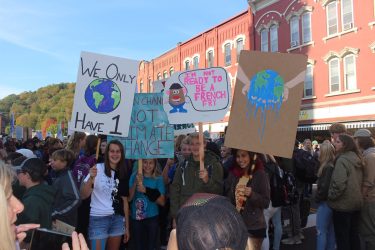 Students line the streets of Montpelier to demand government action on climate issues.

“I haven’t really heard any of the other opinions,” he said. “It’s not really a talked about thing.”

He did confirm that his school let everyone go for the day.

“Our school did a really great thing; They excused all the absences for people coming to the march,” he said.

U-32 freshman Shea Silvers also said she was proud to partake in the rally.

“I am here because people need to really pay attention to the climate,” she said. “There are a lot of people who don’t care about it and use gas, and there’s a lot of pollution in the water.”

When asked if she would be willing to pay more money on her future energy bills for wind and solar, or pay more for an electric car, she was not so sure.

“No,” she said, “I’m willing for people to stop using gas and use more electric things.”

Charlie McCaffrey, a U-32 freshman, spoke at the podium at the City Hall.

“The government will continue to ignore the effects of the poison that they dump into our skies, into our water, and more importantly in our homes,” McCaffrey said. “We need to remove the blindfold that the fossil fuel industry and money have put over our eyes for generations.”

“The teachers were supportive and we were able to get the day excused from school because it’s so important to our school and everything,” she said, adding that she gets most of her information on climate change from media coverage. 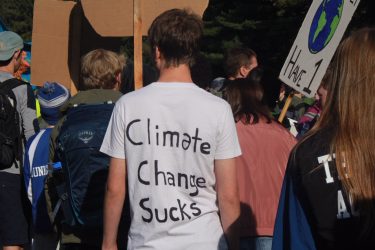 A student expresses his feelings on climate change.

“I think it’s so important that we’re engaging in the largest strike that’s ever occurred, and it’s for the climate, especially since 2018 was one of the hottest years on record,” she said. “I’m glad that it’s youth-led too, because I think that it is just a sign of the future.”

She said some students stayed behind at school, either for personal or political reasons.

As for solutions, Petraro said the Vermont Youth Lobby, a group of which many of these students are members, wants “equitable carbon taxing that doesn’t hurt low-income and rural Vermonters.”

“We’ve also looked at electric vehicles incentivization, we’ve looked at divestment, and the banning of all new fossil fuel infrastructure,” she said.

Jim Minichello, a retired teacher from Peacham, said he and his wife participated in the event to support the cause.

“It’s just an extremely important cause and it’s time to add to the body count,” he said.

He said if the dire predictions of climate change turn out to be inaccurate, it’s better to be safe than sorry.

“If we’re wrong, the climate strikers, no harm done,” he said. “Maybe some expense on people’s part, but if it’s the other way around, harm done.”

As for Allegra Muller, a sixth grade student from Montpelier Middle School, she said the school encouraged her and her classmates to march.

Asked about the cost of converting to a green society, she said she’s familiar with the topic.

“They told us that it is a little expensive, which is why they aren’t doing it,” she said.

Skyler Oriordan, a junior at Pacem School, said his school teaches about climate change in the classroom.

“Just kind of about global warming and how the climate is changing, and rising sea waters and pollution and stuff like that,” he said.

Asked about the solution, he said the “Green New Deal.”