Editor’s note: The following analysis was received by Headliners from firearms legislative policy expert Bill Moore of Johnson. It summarizes and critiques the issues and legislative progress on S.169, required waiting periods for gun purchases.

Following a long delay it is still not clear if any action will happen on this bill. Leadership seems absent and confusion is obvious in the House Judiciary Committee. Disunity in the Democrat caucus is well known by now.

The question is if the 24-hour waiting period is such a sure way to deter suicides, then why can’t they move forward? It seems clear that many Democrats have deep reservations about the effectiveness of something that declares all gun buyers guilty before innocent, victims of domestic violence too fragile to make a decision whether to buy a gun for self defense, and all others too “impulsive” to pursue the means for defending themselves and their families. That is a good sign that independent thinking is happening. 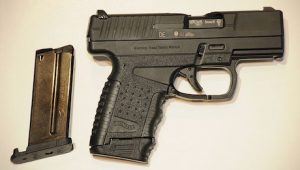 Moore: “It seems clear that many Democrats have deep reservations about the effectiveness of something that declares all gun buyers guilty before innocent, victims of domestic violence too fragile to make a decision whether to buy a gun for self defense, and all others too “impulsive” to pursue the means for defending themselves and their families.”

The purported “deal” in the Senate is that there can be no amendments if the bill is to be sent back with House approval. Lawful gun owners never agreed to this quid pro quo. Law abiding gun owners have been patient awaiting leadership to either move the bill or take a more mature approach to legislative process. A more mature process that would correct some egregious consequences of last year’s magazine ban. Those solutions were tied down with Waiting Periods in the bill as though that would dampen our opposition to infringements such as these.

Following two public hearings where Vermonters loudly and with overwhelming attendance opposed waiting periods, S.169 is stalled. But so are some parts of the bill that will address the unintended consequences of the magazine ban. By banning importation in vague language, shooting clubs and competitions stand to loose large sources of fundraising by hosting out of state visitors who bring tourist dollars and support local businesses. Lawful, safe, and crucial to the local economy, these clubs also do hunter safety and youth programs in archery as well as provide a safe place to shoot. Second home owners and tourists fear that coming to Vermont will subject them to prosecution even if they return home without leaving one magazine behind.

Also stalled are the several proposals of amendment from House Democrats, even from some Judiciary Committee members. One would exempt domestic violence victims from the waiting period by showing a court ordered Relief From Abuse Order or any Temporary Restraining Order, even at the very time victim advocates have shown they are in the most danger.

The Senate deal that House leaders have said they are determined to abide by has distorted the process to the point that any committee discussion of this amendment on the merits is verboten, forbidden. How is that leadership?

Vermont Traditions Coalition has been asking for a waiting period to be removed from the bill to allow other, more rational parts of the bill to be placed in a Miscellaneous Judiciary Subjects bill. But the twisting of those determined to abide by this narrow “deal” has placed a muzzle on ideas that would make Vermonters safer. It is also eroding the respect we all want to have for our Legislature.

Statehouse Headliners is intended primarily to educate, not advocate. It is e-mailed to an ever-growing list of interested Vermonters, public officials and media.