Bernie Sanders and I have little in common, given his passionate commitment to “democratic” socialism and my firm belief in individual freedom. But we do share one thing: We both visited Moscow in 1988, albeit for differing reasons.

Sanders was on what he called “a very strange honeymoon” with his bride Jane. I was traveling in the Soviet Union with a delegation of Western journalists and opinion leaders.

According to the Washington Post, Sanders, then 46, had a wonderful time combining business and pleasure as the socialist mayor of Burlington, Vermont, met “ordinary people” from everyday walks of life (carefully selected by the Communist Party, you may be sure). 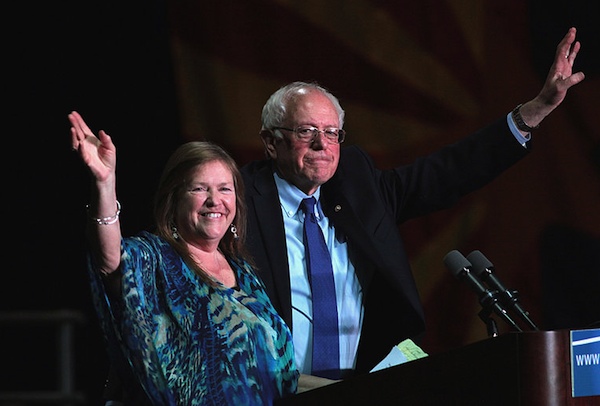 Prior to becoming a lifelong senator and campaigning often with wife Jane Sanders, Bernie Sanders took his wife to the Soviet Union for their honeymoon.

He walked through Red Square and saw Lenin’s tomb, visited Leningrad (now St. Petersburg), and took a boat ride down the Volga River. He traveled to Yaroslavl — Burlington’s “sister city” — where he toured factories, hospitals, and schools, all spruced up for the American visitors like a 20th-century Potemkin village.

Although visiting for only 10 days, Sanders found things that he liked, including the housing, which cost only 5% of a Russian’s income instead of the 40% in the United States. He was obviously unable to visit, as I did, a cramped Moscow apartment of two small rooms occupied by a family of five.

At one point, Sanders went out of his way at a banquet to roundly criticize the way the United States had “intervened” in other countries. But he made no mention of the countless Soviet interventions since World War II—including the erection of the Iron Curtain that sealed off the 100 million people of Eastern and Central Europe, the crushing of the Hungarian Revolution of 1956, the Cuban Missile Crisis of 1962, the suppression of the Czech rebellion of 1968, the banning of the Solidarity trade union in Poland in 1980, and the invasion of Afghanistan in 1979.

While in Yaroslavl, Sanders and his Vermont companions were treated to a visit to a sauna followed by so many toasts of vodka and Russian folk songs that a bare-chested, towel-clad Sanders was inspired to respond with the Woody Guthrie socialist classic, “This Land Is Your Land.”

Just 584 miles to the southwest, Sanders could have visited Chernobyl, site of the world’s worst nuclear disaster three years earlier, which turned that land into no man’s land. Any nation can have a nuclear meltdown, of course, but the Soviets led by Mikhail Gorbachev kept it a secret, allowing people to become sick and thousands to die.

What else did Sanders miss on his honeymoon in Moscow?

A visit to GUM, the gigantic department store fronting Red Square. When I visited, I saw desperate shoppers roaming the aisles like hungry wolves looking for hats, gloves, and coats. Dozens of women lined up to buy a pair of boots which, if they didn’t fit, they would exchange with one other on the sidewalk.

Clearly, Sanders did not have the opportunity, as I did, to visit an official government “grocery” store empty of goods, save for dozens of unlabeled cans ignored by shoppers and a few withered yellowish chickens that even a starving man would have rejected.

Back in Vermont, reported the Washington Post, Sanders held a news conference in which he eulogized Soviet housing and health care and openly criticized America. But he left out the systematic Soviet repression of courageous dissidents like Natan Sharansky, who might still be in the gulag if President Ronald Reagan hadn’t determined to end the Cold War by winning it.

The next year, Sanders visited Cuba, and although he did not secure an interview with Fidel Castro, he returned with even greater praise of Cuba than of the Soviet Union.

While conceding Cuba had “enormous deficiencies” in human rights, he declared that he never saw a hungry child or a homeless person, but he did see a revolution “that is far deeper and more profound than I understood it to be.”

It’s a pity that Sanders didn’t return to Cuba a few years later and take a walk with the Ladies in White—the wives and female relatives of the many jailed Cuban dissidents. The ladies attend Mass each Sunday dressed in white, and then walk silently through the streets of Havana.

This is the true face of the Cuban Revolution, one that an all-too-gullible Bernie Sanders didn’t seem interested in seeing.

3 thoughts on “What Bernie Sanders missed on his Soviet honeymoon”