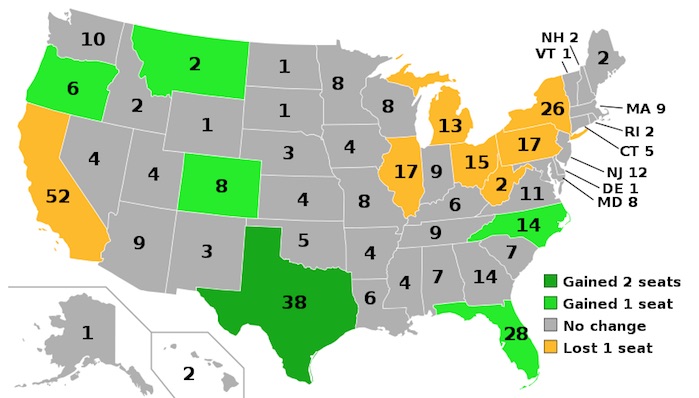 New reapportionment map based on the 2020 Census

The news that six states will gain seats in the House of Representatives and another seven will lose seats, thanks to new census numbers, was widely reported.

What was missed, though, is that the inclusion of noncitizens, including illegal aliens, in the population used to determine apportionment means that many Americans—and states—are being defrauded of their fair share of representation in Congress.

The new census data show that Texas, because of the addition of 4 million new residents, will get two more members of the House. Colorado, Florida, North Carolina, Oregon, and Montana will each have one new representative. This will be Oregon’s first new representative in 40 years, and Montana will go from having just one member of the House to two.

The big losers are California, Illinois, New York, Michigan, Ohio, Pennsylvania, and West Virginia, each of which will be losing a seat.

This will be the first time in history that California loses a congressional seat, although that is no surprise given that the state’s population decreased in 2020, also for the first time since 1900. Those who could move fled high taxes, burdensome regulations, and “restrictive policies on businesses and ongoing lockdowns.” And the remaining residents are so angry that a petition to recall Gov. Gavin Newsom recently received the necessary 1.6 million signatures needed to qualify for the ballot.

High taxes and burdensome regulations seem to be driving congressional losses in other states as well, such as Illinois and New York. Americans are voting with their feet and moving to less restrictive, more affordable states like Texas, Florida, and North Carolina.

One of the first actions by newly sworn-in President Joe Biden on Jan. 20 was his issuing an “Executive Order on Ensuring a Lawful and Accurate Enumeration and Apportionment Pursuant to the Decennial Census.”

In that executive order, Biden directed the Census Bureau to include all individuals that are residents of a state in apportionment “without regard” to their “lawful immigration status.”

In other words, all noncitizens—including the more than 11 million illegal aliens that the Department of Homeland Security estimates are in the U.S., a number that is rising rapidly given the crisis at the southern border engineered by the Biden administration—were to be counted.

How bad is this distortion? In 2015, the Congressional Research Service did an analysis of how representation in the House would have changed after the 2010 census if apportionment had been based on the 2013 estimated citizen population. The result illustrates how much some states are benefiting from trying to nullify federal immigration law.

Instead of losing just one seat, California would have lost four seats because it has the largest population of illegal aliens of any state in the country. Texas, Florida, and New York would have each lost one seat. The states who would have gained one congressional representative each were Louisiana, Missouri, Montana, North Carolina, Ohio, Oklahoma, and Virginia.

A similar study by the Center for Immigration Studies based on 2020 census numbers estimates that if noncitizens were removed from the apportionment population, Ohio, Michigan, Missouri, Minnesota, Alabama, Idaho, West Virginia, and Rhode Island would each gain a seat. California would lose three members of the House, Texas would lose two, and Florida, New Jersey, and New York would each lose one seat.

This means that Ohio, Michigan, and West Virginia—three of the states the census is saying will lose a seat based on the apportionment formula that Biden mandated—are being cheated out of one of their congressional seats because of noncitizens.

Instead of losing only one seat, California should be losing three seats. The only reason it isn’t is because it is a sanctuary state whose large population of illegal aliens is giving it more political power than it should have in the House.

Texas shouldn’t be gaining two seats, and neither should Florida. And New Jersey is also hanging onto a seat that it doesn’t deserve.

There is no question that much of this is driven by the fact that we are a highly mobile society and state governments, with their policies on taxes, regulations, and other issues like COVID-19, are driving that mobility. But it is also being driven by a growing alien population that is unfairly and unjustly altering political representation in the House, cheating citizens and devaluing their votes.

Originally published by The Washington Times