The transcript of yesterday’s Senate discussion of the universal vote-by-mail bill reveals misunderstandings by a key senator, and the threat of the Legislature’s first hot floor battle conducted in the “virtual” realm.

The Senate was discussing the House Government Operations Committee’s proposed amendment to the pandemic emergency vote-by-mail law  passed in March. The law, proposed and championed by Secretary of State Jim Condos, requires Condos and Gov. Phil Scott to sign off before absentee ballots are mailed to every registered voter in the state. Scott insists the decision be left to a neutral, five-person panel. Gov Ops drafted a bill leaving the decision to Condos alone.

“Can I ask you whether you’re familiar with any litigation going on around the country that has sought to block these efforts?” 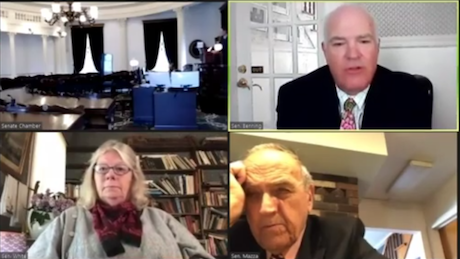 Sen. White: “Not that I know, and I do know that in some states this is seen as highly partisan, but I also know that Idaho which is considered a very red state has been doing this kind of voting for a number of years so it isn’t it isn’t really a partisan issue at all.”

If Sen. White is comparing the Vermont plan to Idaho’s, she is incorrect in at least one important aspect. Although due to the pandemic the Idaho May 19 primary election was conducted solely by absentee ballot, the State of Idaho website clearly says specifically that voters must request absentee ballots. By contrast the Vermont plan would unilaterally mail ballots to every registered voter.

Benning: “OK, well, I I heard last night from somebody who should know that there are in this person’s estimate 11 states that now have this as the subject of a litigious process.”

Benning is correct. In California, Republicans are suing to stop Democratic Gov. Gavin Newsom’s vote-by-mail plan. In Nevada, Republicans unsuccessfully sued to stop an universal mailing of ballots, a plan similar to Vermont’s. President Trump has threatened to withhold grant funding to Nevada, Michigan and one other state over their vote-by-mail plans.

A Chronicle of the Vermont State House survey of all municipal clerks published today reveals that of the 27 respondents, about half support the SOS plan. A large minority cite concerns about potential fraud.

Benning continued: “I know the excuse is Covid-19 and trying to keep people safe, but as I said to you in my email we have an alternative by way of an absentee ballot that makes perfect sense to cure that problem. In my town clerk’s opinion, she thought the best way to spend this money is not to mail out ballots to everyone but to mail out a postcard to everyone and say if you are uncomfortable about coming to the polls,  we encourage you to file for an absentee ballot.

“I think part of my role on the Rules Committee is to try to avoid controversy in order for us to get out of the building an adjournment on time. I don’t think this bill is a shoo-in by any stretch of the imagination. I think it is controversial.”

Sen. Benning also said his study of absentee voting shows universal vote by mail might actually benefit his party. “I don’t subscribe to this as a party issue.”

The Zoom recording of the Senate discussion cut off in mid-sentence. The rest of the discussion had not been posted as of 9 a.m. this morning.

At the Senate Gov Ops discussion on Tuesday, the threat of potential voter fraud was raised by Sen. Allison Clarkson (D-Windsor), and answered (36 minutes) by Dep. Secretary of State Chris Winters:

“I’ve been in the secretary of state’s office for over 20 years now, Secretary Condos more than 10  … and we just have not seen those complaints of voter fraud nothing like we’ve seen in North Carolina. We’ve had a lot of votes, a lot of elections, a healthy amount of vote-by-mail we have had not seen that and the other thing that I do want to say is I really appreciate that Governor Scott in discussing this issue with us he himself has said voter fraud is not a concern for him, that he knows, he thinks it’s it’s overblown.

“It’s not that we’re not concerned about voter fraud. We have not seen it happening in the state of Vermont. We’re always on the lookout for it.”

Clarkson did not ask what steps the Secretary of State’s office has taken to ferret out voter fraud. Nor did Winters expand on how “we’re always on the lookout for it.” The bill passed Gov Ops 4-1, with Sen. Brian Collamore (R-Rutland) voting no.