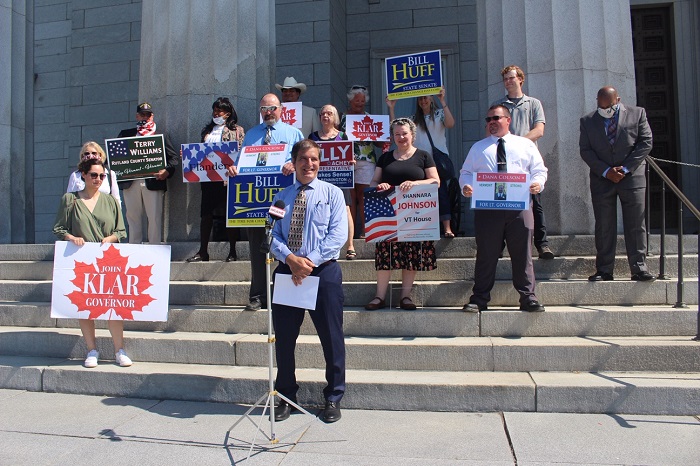 RURAL CONSERVATIVES: A new crop of candidates from the Republican Party are focused on rural living and sound economics.

MONTPELIER — Ten new candidates for Vermont’s House and Senate were introduced Wednesday by Republican gubernatorial candidate John Klar from the steps of the state Capitol.

In what turned out to be a hot, steamy morning, Klar said he coined the term “Agripublican” for his growing group of rural and economy-minded candidates, but added it’s not a separate party from the Republicans.

“We have a specific couple of issues that we are bringing to the voters, particularly the economy and school systems, which do appear to be pretty big issues right now for Vermonters,” he said.

Shannara Johnson, who was announced to be running for one of two seats for the Orange-1 House district, took aim at the Global Warming Solutions Act, a bill currently under discussion by state lawmakers.

“There are so many new taxes coming up to be imposed on Vermonters — carbon tax, gasoline tax — and they say by 2050 they want to cut the emissions to zero. This is one of the cleanest states in terms of air and water, and one of the poorest states,” she said.

Chris Viens, a candidate who is running as an independent but joined in with the group, owns an excavation and construction company in Waterbury. He said he’s discouraged at the way the state government is being run.

“It’s gotten to the point where I’m so fed up with it,” he said. “I’m 60 years old … and at this point I take the gloves off, and people are going to hear what I’ve got to say,” he told True North.

“It’s time for people to start stepping up and acting as community members and helping to support this whole system instead of constantly taking from it. There needs to be some accountability guidelines put forward,” he said.

Levar Cole, a resident of Chelsea, is running for one of two seats in the Orange-1 district. He told TNR that the economic shutdown initiated by Gov. Phil Scott is challenging for residents.

“We have businesses who are fighting for their lives to keep employees online,” he said. “I’ve talked with some employers who have basically spent through all of their life savings.”

Jeannine Young, of Craftsbury, is running for one of two seats in the Orleans-Caledonia House district. She was the Derby Water and Sewer commissioner for 15 years.

“I decided to run for the House of Representatives to make a difference,” she wrote in an email to True North. “The Northeast Kingdom needs someone who will forcefully advocate for recognition and respect by other legislators and state officials. My goal is to help people overcome the obstacles they encounter in their efforts to achieve success in their lives.”

“I am very big on working against the carbon tax,” Lang told True North. “Life in Vermont is financially difficult enough for everybody, and especially in the wintertime with heating fuel. And to be able to drive their cars, except for right now where gas prices have dropped, it was getting pretty expensive for people.”

Other candidates include Brock Coderre, who is running for one of two seats for the Washington-Chittenden House district. He studied business administration, law and finance at Vermont Technical College in Randolph. He also has worked construction, accounting and clerical jobs.

Randy Gray, of North Springfield, is running for one of two seats in Windsor 3-2 House district. He runs a small business that has been hurt by the coronavirus shutdown. According to a candidate profile provided to media, Gray has “worked for many years serving hundreds of Vermont businesses in sales and sales administration for one of the largest building materials wholesalers in the Northeast.”

Dawnmarie Tomasi, who is running for the Washington County Senate seat, has degrees in business management and computer management and has run her own businesses in daycare, soap-making and farming. Tomasi also has volunteer experience with Women Gun Owners of Vermont.

Ken Alger, of Barre Town, is running for a Washington County Senate seat. He formerly worked on a dairy farm and later became a commercial flooring installer. He’s also an NRA-certified pistol and rifle instructor who teaches gun safety to youth.

Also announced as a candidate was Peter Briggs, a fourth-generation farmer running for an Addison County Senate seat. In addition to managing his family-owned dairy farm, Briggs is active in the Vermont National Guard.

Profiles for all the newly announced candidates can be found here.