As uncertainty grows about what role the coronavirus might play in this year’s elections, Secretary of State Jim Condos and Gov. Phil Scott have diverged on how to conduct voting.

Condos wants to commit to expanded mail-in voting now, whereas Scott would like to make preparations but leave the decision until after the August primary.

A recent poll showed 53% of registered voters in Vermont believe election officials have no way of knowing who really casts votes in a vote-by-mail system; less than 30% said voters’ identities could be verified. Despite the lack of safeguards inherent in voting by mail, Secretary of State Jim Condos continues to claim voter fraud “is virtually nonexistent.”

True North put a series of questions to the secretary about mail-in voting and the need for election security. Here are his answers.

True North Reports: How will your office and town clerks know whether ballots sent to voters and returned by mail were filled out by the voters for whom they are intended? 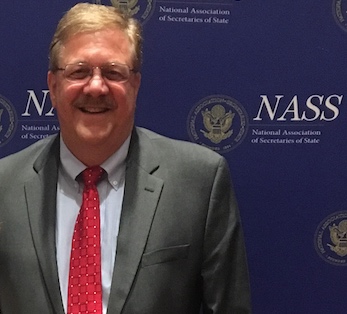 Condos: [State] law currently requires the voter to place the voted ballot in a certificate envelope which requires a legible name and signature before being placed in the outer return envelope. The certificate is filled out under the penalty of perjury, and it says so. It includes a statement that the voter voted in private and was not influenced by anyone.

Roughly 30% of Vermonters vote early or by mail, and in my entire time as Secretary of State I have not seen a single allegation of fraudulent activity like this occurring. While voter fraud can occur, it is exceedingly rare. Even in states like Washington, Oregon, Colorado, Hawaii or Utah, where they have universal vote by mail, fraud rates are infinitesimal.

TNR: Where do things stand in the process of making this decision about vote by mail?

Condos: I have responded to some concerns the governor raised, mainly around timing, and have proposed a compromise — I hope that together the governor and I can come to an agreement and do the right thing for Vermonters.

TNR: What happens if Scott insists on waiting until August to decide?

Condos: Our focus right now is on finding a solution, and moving forward in agreement with the governor.

TNR: Why not let people who are concerned about the virus simply request a ballot through the normal process?

Condos: First, let me reiterate I have two unwavering goals throughout my decision-making process for the 2020 election cycle: preserving every Vermont voter’s right to vote, and protecting the health and safety of voters, town clerks and election workers.

The governor and his health experts have said there will be no way to predict what the status of the virus will be in September, October, or early November. All of the experts, federal and state, are advising of the likelihood of a COVID-19 resurgence in the fall.

In the general election, the way Vermonters vote will remain the same, except we propose mailing a ballot to every active registered voter with a postage paid return envelope. This provides greater voter choice. Shouldn’t voters have the power to decide how they exercise their right to vote during this crisis?

Voters who do not vote their ballot by mail will still retain their right to vote in-person at the polls on Election Day, and we can hope, but not guarantee, that the virus doesn’t pose a threat at that time.

Relying only on our existing request-based system for the November general election will not sufficiently reduce polling place traffic enough to ensure that in-person polling can be conducted as safely as possible for voters, town clerks and election workers, the majority of whom are elderly and represent vulnerable populations. Voters should not have to choose between their health and their constitutional right to vote.