The U.S. Postal Service is having financial troubles due to state economic shutdowns and social distancing mandates, and the strain on resources could compromise the mail-in voting system, Vermont Secretary of State Jim Condos said.

Dimondstein explained that the Postal Service could run out of money within months.

“It’s a nontaxpayer-based quasi-government agency that runs on postage and postal products, no taxpayer dollars. So what happens is, you have a precipitous drop as is happening now, and the Postal Service has done some modeling and it believes it could run out of money by the end of the summer or early fall, based on up to a possible 50 percent drop in revenues specifically related to the pandemic,” he said.

The agency expects to lose $13 billion in revenue due to the shutdowns this year, and more than $50 billion over the decade. President Donald Trump has said he would like the Postal Service to raise its prices for online retail giants such as Amazon before he commits to the $75 billion aid package the service is requesting.

Wyman said with the coronavirus possibly still around come election season, she thinks there will be increased reliance on voting by mail. Her state of Washington currently does vote-by-mail only. 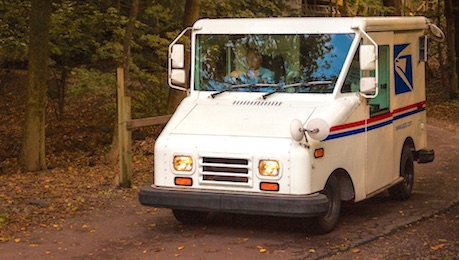 VOTE BY MAIL IN JEOPARDY?: If the U.S. Postal Service is forced to make cuts due to the financial crisis, vote-by-mail systems could become undependable.

“You are going to see a wide swath of our electorate who are going to need to have an option that does not require them to leave their home to participate in the election, and I think each state is going to have its own unique solution to that,” she said.

Condos explained what this all means for Vermont’s vote-by-mail system, which about 30 percent of all voters utilize.

“I can’t understate how disastrous this could be to our democracy and our economy,” he said.

Vermont currently allows vote-by-mail up to 45 days before an election. Condos said to comply with this rule, his office would have ballots sent in the mail to those voters at least by June 26, and by Sept. 18 for the general election.

“Simply put, mid-election year is not the time for changes to the dependability of the postal service for voting by mail for so many Americans,” Condos said. “We rely on the delivery of mail every election cycle. If the postal service ceases to exist entirely as a result, that is a worst-case scenario that we are, frankly, not well prepared for.”

Condos said there’s federal money available to help aid states in elections, but it requires a 20 percent match, which he thought might be too steep.

Asked how economic challenges and limited post office resources could impact the integrity of the election, Condos said election security is not a concern with mail-in votes. However, he acknowledged a case of fraud in North Carolina that resulted in a court nullifying election results.

“The vast majority of experts say that the issue of widespread systemic voter fraud is virtually nonexistent,” he said. “Yes, there was a case in a Republican race down in North Carolina, but that was election fraud, not voter fraud, and really what that was is it turned out to be kind of an outlier — it really was a situation where there was some nefarious ballot harvesting going on, and I think that we all have to be careful of that as well.”

Wyman said she’s concerned that any strain on Postal Service resources could prevent the ability of voters to obtain ballots by mail.

“It absolutely is one of the myriad of concerns I have in our system, in particular, that if we have reduced delivery, or [if] staffing levels make it so they are only delivering to parts of the state three days a week or something, that is going to have an adverse impact potentially on the accessibility for those voters.”

Wyman added her administration is reviewing data from 2018 elections suggesting there was some potential fraud.

“Out of the 3.2 million or so ballots that were cast in 2018 in Washington, it appears that about 130 people may have voted more than once or voted on behalf of a deceased family member,” she said.

Condos said not only are elections at stake if the mail system is compromised, but other functions of the Secretary of State’s Office as well.

“Vermont businesses and entrepreneurs need a dependable Postal Service as well to submit filings and reports to our office so they can stay in compliance with the law as we grow our workforce and our economy,” he said.